How to Beat Competitors to the Market Through IP Intelligence

When you want examples for how long it can take to lose your market share before you notice you’re in trouble, examine the American car manufacturing landscape. And, if you want examples of how permanent—or semi-permanent, at the very least—that loss of market share can be, again, there is no better example than Ford, General Motors, and Chrysler.

It’s not hard to remember the “good ol’ days” when American cars reigned supreme. Even those who aren’t old enough to remember the shiny Buick Roadmasters and classic Cadillacs can still see them in vintage movies. By the 1960s, the popularity of these brands began to decline, even with the introduction of muscle cars like the Mustang, the GTO, and the Camaro.

Of course, we still remember the GTO and the Mustang fondly, and we don’t even stop to think now that the Volkswagen was starting to gain in popularity, too. After all, who sang a song about the Volkswagen? No one, of course. Meanwhile, the radio continued pumping out the hits about Mustang Sally, Little Deuce Coupe, and Daddy taking the T-Bird away. With so much attention focused upon American cars, it was easy to let the Japanese and European carmakers slip into the room unnoticed.

The Long and Winding Road

Those golden days are definitely gone for our top three automakers. Even now, they continue to lose market share. Had they stopped and looked around in the 1960s when Honda, Volkswagen, and Toyota started to gain just the slightest foothold in the States, these car manufacturers may have had a chance to make some plans.

The European car industries offered better quality, reliability, and better gas mileage. Sure, they were more expensive in the outset, but consumers were willing to pay for cars that lasted longer and needed fewer repairs. In response to consumers’ desires, Ford debuted the Edsel—a behemoth of a car with low gas mileage, multiple issues like oil leaks and poor mechanics, and a higher price tag to boot. When faced with failure, the Edsel marketing manager JC Doyle said, "What they'd been buying for several years encouraged the industry to build exactly this kind of car. We gave it to them, and they wouldn't take it. Well, they shouldn't have acted like that ... And now the public wants these little Beetles. I don't get it!"

And they didn’t get it. It took these companies nearly thirty years to catch on.

Think on that: It took these car companies thirty years to recognize what consumers saw immediately.

That’s the power of IP intelligence, if you know how to harness it. Know now what other companies are doing—or plan to do—that could take your portion of the market share. If you wait decades to acknowledge the problem, you may need decades to reverse it—if that’s even possible.

Our American car manufacturers are on the rise again, but even after putting forth the best numbers in decades, they’re still ceding market share to foreign car builders. It’s a game of catch-up that Ford, GM, and Chrysler won’t win any time soon. 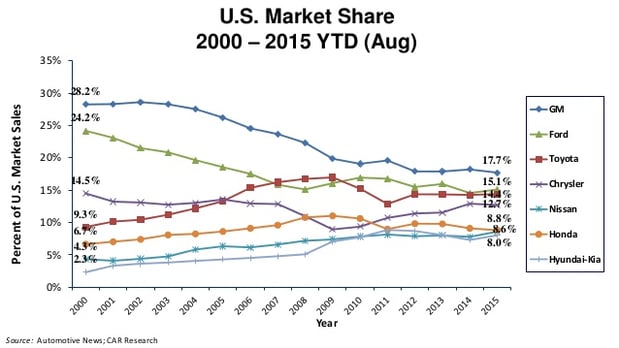 The biggest mistake businesses make when they notice another company is encroaching upon their market is to hold fast to their proven products rather than innovate. By the time these car makers knew what buyers were really looking for, those buyers could get what they wanted from someone else. Simply offering the same thing will not help you regain your footing.

You may already know Henry Ford’s famous resistance to change, ironic in many ways since he's credited with saying, "If I had asked people what they wanted, they would have said faster horses." Once he built his famous Model T, however, his desire to innovate disappeared. Why fix what isn't broken? His steadfast refusal to introduce new models and colors may have set the tone for future decades, though Ford did manage to recapture some success down the line. Still, it was that steel grasp on “same,” the determination to keep doing what worked instead of looking forward through innovation, that plagued all of the American car makers.

What if Henry Ford had welcomed change and led the Ford Motor Company into a new era of innovation? Would the 1958 disaster of a Ford Edsel ever have been built? Probably not. Ford could have set the standard even in the 1920s and been well ahead of the curve when the European and Japanese car manufacturers began to encroach.

Think for a moment about Kodak, who held the future right there in their own patent portfolio but failed to act. Believe it or not, the film and camera giant actually developed and patented the digital camera, but then they sat on it out of fear for what the innovation may mean for their film business. Instead of capitalizing on the shift in consumer need, they allowed other companies to virtually steal their market share. By the time they developed their own digital camera for public consumption, it was too late.

Looking Forward Through the IP Landscape

Now, imagine you’re in Kodak’s shoes, holding the patent to something that could possibly change the way the buying public views photography. Sure, you have your current products to protect, but there’s a lot of promise in the innovation you’re eyeing. Do you set it on the shelf and push away any other innovator who comes too close? Or do you leap?

What if, instead of eventually copycatting other companies’ digital cameras, which had essentially stolen the market share they should have owned dead to rights, Kodak had begun exploring new ways to make those digital cameras easier to use? With a quick glimpse into the white space of available IP, Kodak may have seen room for memory and storage innovation. They may have lost their grasp on the digital camera, but they still could have claimed some of the digital photography revolution.

This is how your company can also get ahead of your competitors and stay ahead. By investigating various patents you already own and those that are being filed by other companies, your business can better understand where your industry is headed. You’ll know before buyers do what the next big thing will be, and your company can be the one that brings that innovation to life.

Your first goal when examining the IP landscape is to determine who your current competitors are. You probably already know most of them, but there may be some companies that you haven’t before considered. They may have been steadily taking some of your market share without you realizing they were a threat.

Next, you’ll determine who your future competitors may be. These are companies that have filed patents for products or services that either resemble your current offerings or could render your current products obsolete. It’s important, at this phase, to open your mind to the possibilities. Remember that Blockbuster probably never considered Netflix a competitor because Netflix didn’t intend to set up brick-and-mortar stores.

From this point, with all IP and filed patents located and assessed, you can begin to make your plans for the future. Those plans may be to open up your own space for industry disruption or they may lead you to acquire available intellectual property to add to your current patent portfolio.

Most importantly, you’ll take a pro-active stance, rather than watch your market share slip away with no idea how to regain it. If you’re ready to get started, we can help.