Patents Are Expensive - How To Make Patent Maintenance Fee Decisions

Here’s a newsflash: patents are pretty expensive. Because they are granted on a country by country basis, there are different maintenance and filing fees required by each country in which you’re attempting to obtain a patent. A 2003 study from the United States General Accounting Office reported that the lifetime cost for a small company to file and maintain a patent in the United States (and in 9 other major industrial countries) ranged from US$170,000 to US$340,000 in 2002 Dollars. That’s about $220,000 to $440,000 in 2013 Dollars. It’s also important to note that these figures apply to small companies—which usually pay about half the filing fees that large companies pay. 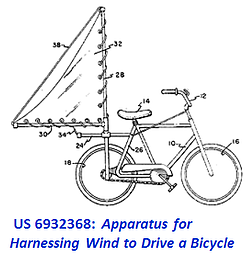 Because patents are expensive, the decisions you make regarding your patents can have serious financial and strategic impacts on your business. For instance, a “sail on a bicycle” may be a cool invention…but is it a valuable patent? It really all depends.

First, you need to consider the components of a patent’s cost.

These are selected U.S. Patent and Trademark Office Fees as of January 1, 2014 for Utility Patents:

A “small entity” means an individual, a non-profit or an organization with 500 or fewer employees. A “micro entity” means a small entity that has filed 4 or fewer patent applications, and has gross income that is less than or equal to 3 times the median household income.

These are just the filing and maintenance fees in the U.S.; they do not include attorney or translator fees.

A Million Here, A Million There – Pretty Soon You Are Talking Real Money

One of our clients—who has approximately 20,000 U.S. patents—asked us to calculate maintenance costs on their portfolio for the next 10 years, assuming they didn’t file additional patents and only paid the required maintenance fees for the countries where they had patents (also assuming those fees remained the same for the duration of those 10 years).

What Are Companies Doing About This?

With these huge costs in mind, companies use a variety of techniques to decide whether or not they should keep a patent in force and pay the required maintenance fees.

Step One: Find Your Process for Deciding What to Patent

When writing articles like these, it’s easy to assume that a company has a good process in place for determining what to patent. Unfortunately, this is often not the case--even for large companies with resources. Certainly, some inventions should come from planned research and development.

Thinking up other inventions can be encouraged by your scientists and engineers through a variety of incentive programs.

These are the two major sources for the “patent funnel,” which has to be vetted by the company, usually through the establishment of a Patent Review Committee. Ideally, the Patent Review Committee is considering the protection of two things: (1) current and planned products/services and (2) revenue streams. Well-functioning Patent Review Committees also consider whether an invention supports strategic business objectives, like limiting a competitor’s expansion room. Well-managed invention disclosure programs can elicit new business ideas, but, in my experience, this simply does not happen as often as it should.

Should We Pay Maintenance Fees?

Assuming the Patent Filing decision process is functioning at a high level, the company will either start to amass a portfolio of patents or will add to its existing patent portfolio.

In the U.S., patent maintenance fees are due three different times throughout the life of a patent, and may be paid without surcharge at these intervals:

Maintenance fees may be paid with a surcharge during the following "grace periods”:

The responsibility of making the patent renewal payments is generally held by the Patent Review Committee.

Decisions at the 3.5 Year Mark

Some Patent Review Committees don’t review patents at the three-and-a-half year mark, usually on the assumption that a patent so young still has the “merits” that influenced the decision to patent it in the first place.

A variation on this is to do a “lite review” at this time. This decision not to review or to do a lite review may make sense because the 3.5 year fee is relatively small.

These later maintenance fees are 2x+ to 4x+ higher than the 3.5 year fees. In addition, for patents at the 7.5 year mark, the “investment thesis” should have produced evidence as to whether the patent is meeting its initial potential. If the patent is not valuable to the company at the 7.5-year stage, then there is definitely money to be saved by the company.

How Not To Review

One company I encountered gathers a list of patents approaching the 7.5 year decision at least one calendar quarter in advance—and this is a good start. However, they then distribute the list to the committee (which doesn’t actually meet in person) with a note saying, “Let me know if any of these should be renewed. You have 30 days.”  They take the “hit list” of patents not to be renewed and send an email to the assigned business unit, essentially saying, “These will not be renewed unless you say otherwise.”

What is wrong with this approach?

Individual Asset Problem. This company’s approach looks at a patent as an individual asset, not as part of a portfolio that was built to support something greater. The rationale is that if a company determines that the patent isn’t important, they don’t need to worry about the rest of the portfolio until renewal fees are due.   This rationale poses several problems:

I assert that the situation I am about to describe is a better way, and I know this because I helped design it.

You decide if I am correct in my assertion.

Background: This company (“SmartCo”) has 3,000+ U.S. patents and a well-designed, high-functioning Patent Review Committee—one consisting of inside patent counsel, technology gurus and business liaison people. SmartCo recognized its need to seek active business input on its initial filing decisions and subsequent renewal decisions. The problem they had was that it was extremely time-consuming to review the renewal patents from a legal and technical viewpoint before discussing them with management. SmartCo also did not have a consistent and evidence-supported analytic approach. It was mostly opinions – experienced and sophisticated opinions to be sure, but not easily presented to management.

Working with SmartCo we designed and tested a process for data collection and review. A database of patents—with U.S. renewal fees due one calendar quarter in advance—was assembled. The database included basic data from the U.S. Patent and Trademark Office and information pulled from SmartCo’s internal docketing and patent management system. IPVision ran specific patent metrics on the patents in the database.

SmartCo’s attorneys were provided with a List of Patents to Review consisting of:

The data provided to SmartCo’s attorneys included IPVision patent claims analytics for each patent and patent citation information, including the degree that SmartCo’s other patents cited on each patent and the degree of citation from SmartCo’s competitors’ patents. SmartCo remarked that in addition to the unique analytics provided by IPVision, just the assembling of this external and internal information in one place was a big time saver for the attorneys. Note: We purposely did not provide them with patent family information at this stage.

Each SmartCo attorney was asked to review each patent provided to him or her and make “keep” (pay the renewal fees) or “prune” (let the patent expire) decisions. The attorney then met with the business management team who was in charge of the patents and discussed recommendations and business needs in order to come to a final decision.

The process implemented at SmartCo resulted in increased efficiency for the SmartCo attorneys. The IPVision process required less than 15% to 20% of the time attorneys spent using the Manual Review approach, while at the same time enabled more robust and strategic discussions with the business unit managers.