Twitter: Great IPO but are IP Storm Clouds on the Horizon?

The first day of Twitter's IPO was spectacular with the stock soaring 73% by the end of the first day of trading.  However, there are storm clouds on the horizon.  As reported by Ingrid Lunden in TechCrunch IBM has alleged that Twitter infringes on "at least three U.S. patents" held by IBM.   To understand this situation IPVision mapped these IBM patents as well as Twitter's own patent portfolio.

The three IBM patents are:

The first patent (US 6957224) covers the use of "small URLs" or webpage addresses. The second patent (US 7072849) presents an efficient method for serving ads with interactive applications. The third patent (US 7099862) describes a method for generating a list of common contacts among persons.

This Multi-Patent Landscape Map shows the 3 U.S. Patents that IBM alleges are infringed: 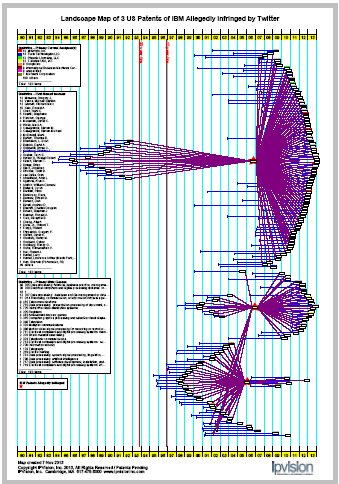 The boxes with the Red Stars are the IBM patents.

To the right of each Red Star are the patents that cite the IBM patents.  These include 14 eWinWin (red top boxes) patents- Note: eWinWin sued Groupon for infringement; 13 patents owned by Tuxis Technologies, LLC, an intellectual property acquisition and licensing company; and 12 patents owned by Phoenix Licensing LLC, which has sued financial institutions over marketing technology.

Twitter is new to the patent game. A recent search showed just 4 U.S. patent properties currently owned in the name of "Twitter". Two of these are recently issued patents and the other 2 are pending applications.

As shown by this  IPVision Patent Citation Interconnection Map, the Twitter patents are too new to have been cited by others.   Note: Click on the Patent Map Image on the Right to View the Map Interactively.

The 2 issued U.S. patents of Twitter are US8401009: Device independent message distribution platform (which describes a method of sending a message to multiple users who may be receiving the same message using different devices or interfaces) and US8448084 User interface mechanics (which involves displaying a scrollable list of content items and refreshing that list based on interpretation of commands).

This is a beginning but now that Twitter is a public company it has to do a lot more given the headstart patent positions of operating company players such as IBM and patent assertion entities such as eWinWin, Tuxis Technologies and Phoenix Licensing.