So far, throughout this series, we’ve established the IBM revolutionized the way corporations monetize their patents by filing for them by the tens of thousands. Of course, we also know that filing and maintaining a single patent family can cost hundreds of thousands of dollars over the life of those patents.

What’s a company to do when there are potentially billions of dollars to be made on licensing deals, at least in the case of IBM? What solutions could present that might make patents more affordable so that corporations could continue to amass portfolios for the purpose of monetizing their IP?

As we mentioned last time, many of those companies began outsourcing their patent writing to India—an activity the USPTO noted could be a violation of U.S. Export Control laws. What is an enterprising corporation to do when their main source of cheap patent prosecution is no longer an option?

Yes, for a flat fee, businesses could retain the services of a law firm for hastily assembled patent filings, all for the purpose of building a large patent portfolio.

The drawbacks to using a flat-fee firm far outweigh what many might consider to be the benefit—more patents for less money. With a flat-fee rate, how can you be certain your attorneys are giving you the amount of work necessary for a quality patent? What happens if your patent application requires revisions? You’ll likely need to pay a second flat-fee for your attorneys to make edits or clarifications that will better protect your intellectual property.

Let’s investigate a company that tested several flat-fee firms before narrowing down to seven—before IPVision examined the applications and issued patents.

In this first graph, you’ll see all the firms, with the seven chosen firms surrounded by green boxes. The graph shows the IPVision Claims Ratings for published applications.  Fortunately for the company in question, they narrowed down their choices fairly well, with most patent applications coming in under the portfolio average for “minor” claims problems.

In the second graph, we break down the applications a little more to determine the breadth of the language. This time, we can see that six of the seven chosen firms have a higher percentage of good claims than the overall portfolio. However, three of the dismissed firms had even higher “good claim” percentages. 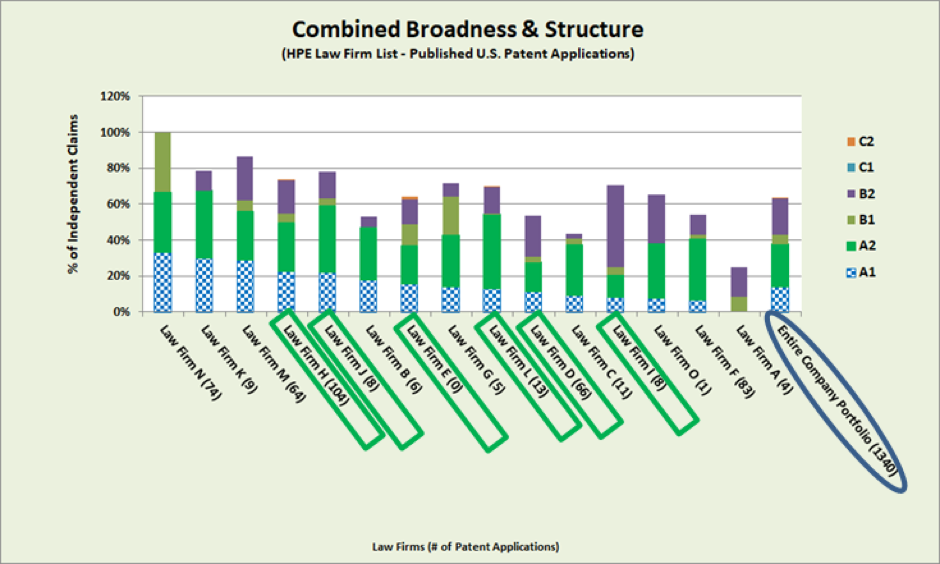 So far, things look pretty good for the company that chose these flat-fee firms, right? What happens over time, as the patent applications are examined at the US Patent and Trademark Office? Have the flat-fee firms exhausted their resources with the filing process, leaving nothing for the needs of the company through the prosecution process?

Let’s take a look at the issued patents to see how the company fared. In this first image, you’ll see that only one of the chosen firms has patents issued that contained fewer structure problems than the average of the entire company portfolio. What happened? They looked well on track during the application process.

In the second image, you’ll see that firm is the only one that also rated higher for broadness and structure than the overall portfolio.   Also, several of the dismissed firms rated higher than those who were chosen. Unfortunately, the company didn’t know this until after choices had been made because IPVision wasn’t involved until the process was complete. 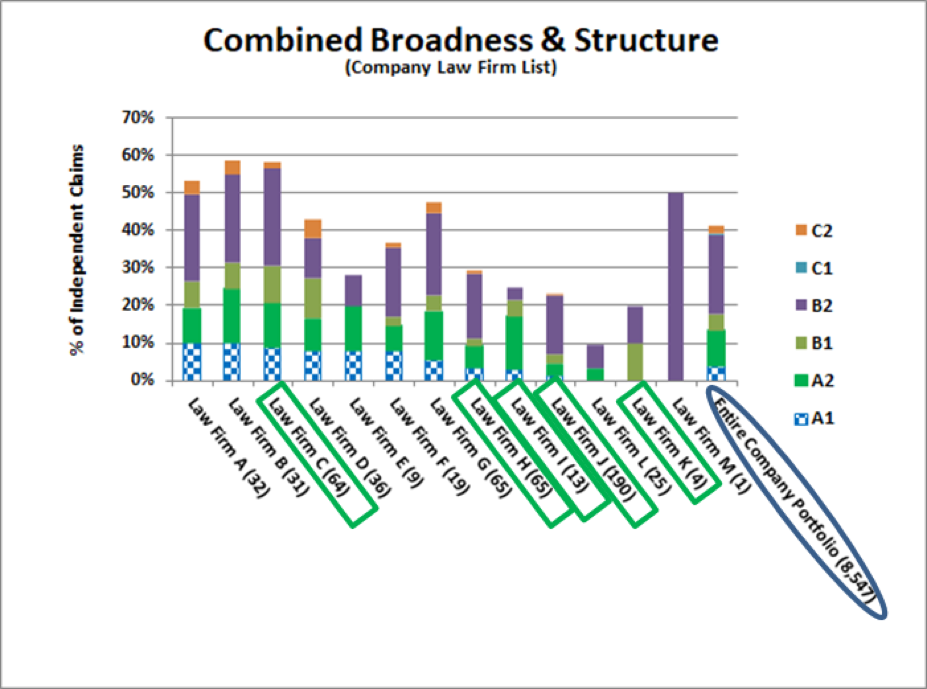 Is it possible that the flat-fee firms simply ran out of steam during the prosecution process, or did the company make poor choices when choosing a firm?  One thing is for sure: With the help of IPVision’s claims analysis, the company could have chosen the best law firms from the beginning, regardless of the payment structure.

While we could pull out dozens of examples from companies that experienced lower quality patents in return for those low, low filing fees, we have one specific example, complete with in-depth analysis, to illustrate the problem.

We looked at claims quality by patent application year and found that claims quality had been relatively high over time, but that quality was lower during the period when the company was using a flat-fee model.

These numbers are just for patent applications and not for the issued patents. You may wonder if the patents that were issued were better.

In this second graph, you’ll see the combined claims ratings according to the year of application. The company saw 12.3% of good claims for their overall annual filings. However, during the years they chose to use a flat-fee system, that average of good claims went down to 7.4%.

Several companies have since discovered the error of their ways. You may also now realize that your massive pile of patents could be essentially worthless, save for the intimidation factor it may bring. If you’d like to be sure, reach out and let us use our proprietary patent analysis system to determine the strength of your patent claims.

Next time, we’ll talk about those who amass piles of patents for the sole reason of taking everyone to court over infringement. We call them non-practicing entities. You may think of them as patent trolls.