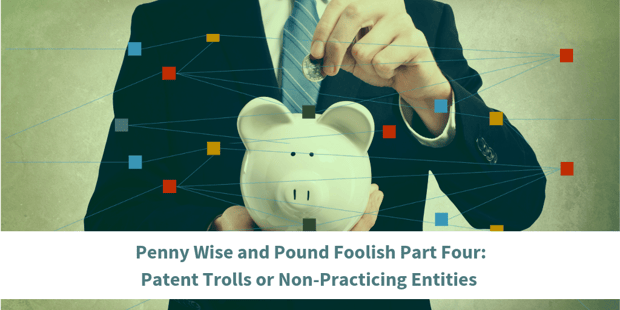 Organizations that we’ve come to know as patent trolls or “non-practicing entities” certainly think so. These NPEs are businesses that buy patents without the intent of using the technology for any reason but to license or litigate them. Their reputation for enforcing bad patents—such as the podcasting situation with Personal Audio, LLC, that covered the news and raised the ire of many podcasting celebrities—has earned them the moniker of patent trolls.

For these NPEs, it’s strictly business. One such business is the well-known Intellectual Ventures. For years, Intellectual Ventures would buy a large “bag of patents,” taking the chance that there would be a diamond among all the duds. The tactics worked, as IV became one of the top five owners of US patents by 2011. In December of 2013, the firm released a list of nearly 33,000 patents out of the 40,000 they had in their monetization program at that time.

The Price We Pay

Aside from the irritated corporations caught up in lawsuits, many may wonder what’s the big deal? NPEs have developed a business model that works for them, right? If it’s working, who’s it hurting?

The truth is that these NPEs have actually cost the US economy more than $500 billion in litigation costs and fees since 1990. In addition to the monetary costs, these NPEs also stifle innovation through fear and intimidation tactics. If they’re not planning to use the technology for any reason except to punish others who use it, then new products can’t be created and new technology can’t flourish.

How many groundbreaking innovations have been suffocated at the hands of a patent troll? In addition to suppressing the technology, NPEs also cost burgeoning companies venture capital dollars. One study by MIT found that VC investment for startups and new innovations would have been $21.8 billion more over the course of five years, except for the cost of litigation brought by patent trolls.

Some courts are helping to wage the battle against patent trolls by requiring many to pay the court costs of the defendants in cases where the NPE lost the case. This is a heartening, though not yet widespread, development that could someday become the law.

In the meantime—since you can’t count on the courts to find in your favor or to require that NPEs pay your costs if they do find in your favor—you’re better off well prepared before researching and developing products using new technology.

Before you get started, give us a call. We’ll help you thoroughly investigate the technology landscape in your industry to determine if you have room to move with your innovation. We can also investigate the claims in any patents that might present a stumbling block.

Keep in mind that many of these entities are only interested in money. You may find that the technology you wish to use is already patented, but that doesn’t mean the road ends there. We can help you determine whether licensing the technology for your innovation is a wise choice—or whether you could create your own without infringing on the IP already in place.

If you enjoyed this series and would like to keep a copy for yourself, download the full ebook below.