Patent News August 2020: The Technological War With China and How Apple is Responding

The question of the moment concerns technology pioneer, Apple. Will they boon or bust? Chances are they will be just fine, with a few hurdles to overcome first. And even though we may have thought we were closer to a corona vaccine than we actually are, all is not lost. We will still have dinosaurs on phones.

Shanghai Zhizhen Network Technology Co. (or, Xiao-i), an AI firm in China announced in early August that they are suing tech giant, Apple, for patent infringement. Xiao-i is asking for $1.43 billion in damages and cessation of sale and production of products that use the voice activated intelligent assistant, Siri. Xiao-I claims their company originally developed this technology. Losing sales in China could result in a nearly $10 billion hit, but as you might imagine, Apple does not plan to go down without a fight.

It’s not all bad news for Apple. Even if they lose the lawsuit, it seems they will be fine. Apple continues to lead the world in smart watch technology, and the upgrade revealed in the patent for the Apple Watch 6 might be enough to help keep the tech giant in business (along with many other products that people continue to buy). A peek at the Series 6 patent indicates that the new Apple Watch will be advancing its Fall Detection capability to check for mobility and set alerts, alarms, or even calling for help if no movement is detected. This type of technology is definitely aimed at enticing the Silent Generation.

Because this Apple Patent US10629048 “Detecting falls using a mobile device”  is so new it has not been cited by any other U.S. Patents.  To get a view of the patent space in this type of situation we created a Backward Cousin Interconnection Map that shows the patents that cite the same patents that the Apple patent cites.  The Apple patent is shown in the red circle.  Other companies appearing on this map are Philips and Amazon.

See Patent Cousin Maps for more information on this type of patent maps.

Dinosaurs Return Via AR, Thanks to Google

For the latest in AR, artists from Google studied a way to make AR dinosaurs behave as they may have in the past and add them to your Google app on your phone. Create your own video or just play with your prehistoric friends.

Breakthrough technologies such as 3-D printing and AR often take many years to reach commercial potential. Often the initial innovators don’t reap the rewards from the breakthrough – e.g. the original 3-d printing patents have expired. A company that has been at the forefront of some of the hardware components for AR is Microvision (NASDAQ: MVIS). Founded in 1993, Microvision has had a very bumpy ride in the stock market over the past year with rumors of a bankruptcy filing. Last week I had a request from a Microvision stockholder who had read my Forbes column How To Tell What Patents Are Worth. He asked what I thought the Microvision patent portfolio might be worth. To answer that question is a major undertaking but I did do a quick look at the patent portfolio, which consists of over 600 U.S. patents and published applications.

I was curious about the quality of the patent claims in the portfolio so I ran an IPVision Claims Benchmark on the approximately 475 U.S. patents that issued from applications filed in the last 20 years.  The Benchmark consisted of 838,171 U.S. Patents in the same patent technology class in same year patent issued. There were 2,312,477 independent claims in these Benchmark patents. The Microvision patents contained a higher percent of Broad Claims (consistent with their early innovations in the space) and Better Claims Quality – Fewer Structure Issues: 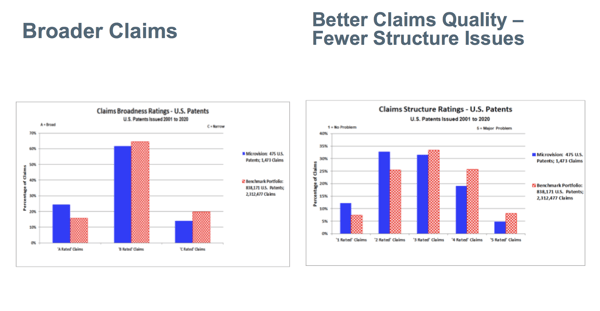 And just when we thought there might be hope for it to all be over, someone went and checked the facts. Many were hopeful for the Covid-19 vaccine promised by Pirbright Institute in Great Britain in social media posts. However, the patent Pirbright developed was for a vaccine for a more generic form of a coronavirus and designed to prevent the resulting respiratory illness that could follow the disease in animals. Also, it was filed in 2015, years before the Covid-19 virus developed. Pirbright, along with 25 other candidates, will continue working.

Your patent idea may be as simple as a dinosaur on a screen, or could be the next medical breakthrough the world is waiting for. You’ll never know the impact you could have until you push through with your plan. Need more help with your IP? Contact IP Vision for help.