November Patent News: Tech Is Getting Smaller and More Portable

In today’s world, it is becoming harder and harder to continue without being connected, so companies are doing what they can to make technology work in your favor, whether for business or leisure. This month’s patents show us new ways to stay safe and also give us a look at how Sony will be changing the game with their next console and headset.

Because picking up our phones was a lot of work, Apple created a smart watch to always have on us. Now, because turning our wrists is a lot of work, Apple has now created a smart ring, so we can control it all with the touch of a finger. A patent application filed in 2015 (and may or may not come to fruition as a product) was just awarded to the tech leader that can simplify everything to date. The purpose of the ring would be for use in situations when a phone or watch would be dangerous, cumbersome, or rude. With Wi-Fi and Bluetooth connections, calls, messages, biometric readings, and even transactions can take place in a more discreet manner. A product could launch as early as next year.

To the left below is an IPVision Patent Landscape Map of this patent (U.S. 10,444,834 Devices, methods, and user interfaces for a wearable electronic ring computing device). Note that the application was filed in October, 2015 (red circle to the left), and the patent was issued October 15, 2019 – four-plus years later. During this period, 148 other patents cited the published application.

Trunk-Deployable Drones are the Latest Patent from Ford

Originally developed as a safety measure, Ford is now envisioning its trunk drone

as something that drivers can use for fun. The American auto maker recently patented the idea of the quadcopter drone that can be launched from the rear of the vehicle, conveniently being stored and charged in the trunk as well. After deployment, if so programmed, the drone could follow the vehicle to ensure safety and signal for help if needed. However, it is reasonable to assume that the millions of people who use drones as a hobby will find other uses for the car-launch drones.

What is Ford doing with drones?   We found 21 US patents or published US patent applications listing Ford as the owner and that contain the term “drone” in the Title, Abstract or Claims. Most of these have been filed in 2016 or later.  Here is an IPVision Patent Landscape Map for these patent properties.

If PlayStation 5 is on your Christmas list for next year, you’re in luck. The patent for the gaming system suggests that the system will now include a digital voice assistant, like Apple’s Siri. Sony feels this inclusion is helpful to gamers who want to know more about the game they are playing or even get help with their next move. The assistant will have access to a calendar and reminders, so appointments can be set with other players while in game. The hope of the game maker is that those playing the games can become even more a part of the world they have entered with each game. Parents hoping to drag their kids out of those games may need to look for help elsewhere.

This patent application -  US 20190291011 “VOICE HELP SYSTEM USING ARTIFICIAL INTELLIGENCE” -  was filed in the U.S. in May of 2018.  Sony has filed an Information Disclosure Statement (“IDS”) disclosing 5 US applications as prior art.   This IPVision Landscape Map shows those applications and the patents citing them.

Sony PlayStation 5 Will Lead to Next Version of VR Headset 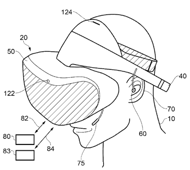 And as if gaming didn’t absorb enough of the user’s real world, Sony is about to move it along in the world of virtual reality with a second version VR headset. The new headset will incorporate an optional extra camera for the controller and could possibly be wireless as well. As exciting as this new headset could be, gaming enthusiasts will have to make do with the VR1 for a while. The V2 is not likely to be released until after the PlayStation 5, sometime in 2021.

Not all IP is technology-related, but it is all innovative. Have you come up with the next step in your industry? Talk to IPVision today to see how to move forward.