Should the Company Make or Buy an IP Portfolio? 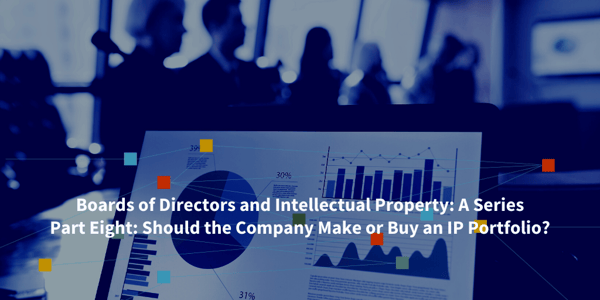 Let’s return now to the mental image of a piece of real estate. If your parcel of real estate is “landlocked” because someone else owns all of the adjacent property, you have no way of reaching your parcel unless you and the other landowner reach an agreement to provide an easement, or a license to cross the land.

How can you create an easement when the property owners around you have built something akin to the Great Wall of China? Your only choice is to find the property that works best for your needs and negotiate the use of that property. If we were to compare this to intellectual property, this would be licensing the patents and technology you need to further develop your property, or perhaps acquiring the patent or patent portfolio.

It takes time to build a patent portfolio organically. There is R&D that hopefully leads to inventions that are captured in patent applications some of which result in issued patents. This process can take three to six years, or more.

An alternative or complementary strategy is to acquire the intellectual property you need either through the purchase of a patent portfolio or the acquisition of the company holding that portfolio.

What Do Patents Cost? The Cost of the “Make” Side

Cost is obviously a key component of the Make/Buy IP strategy.   You must consider all costs involved in acquiring patents—whether through patent applications or through the purchase of or merger with another company.

When it comes to patent costs, a single patent with coverage in the US, EU, and Japan can cost up to $100,000, with even more spent over the course of twenty years to maintain those patents.[1]Without funds spent for maintenance, the company might risk the possibility of their patents expiring or losing effectiveness.

Because of the cost of patents, many companies historically delayed filing patent applications on R&D inventions until the resulting products were ready to go to market.

There’s a very specific problem that can arise when waiting for product launch to apply for the patent—and that’s potential disruption. Work within the research and development phase isn’t protected, at least not without a patent application. Without patenting the various technology your R&D team is exploring, you could end up giving away millions of dollars, simply because you chose not to spend the additional money on a patent.

Before 2011—the year the America Invents Act was signed into law by President Barack Obama—the first to invent was the winner. After the act went into effect, the law changed to protect the first inventor to file a patent application. In other words, if you’re the first to invent something but don’t protect it with a patent application, then your competitors can file first and snag that technology for their own financial gain.

At IPVision, we have seen and worked with a number of very large companies that don’t file patent applications until a product is ready for market. In one notable case, the company spent eighteen months in consumer and product testing, only to find that, in the interim several smaller, more agile innovative companies had filed patent applications on several key components of the product, features the large company could have filed on but didn’t. As a result, the large company decided not to proceed after spending eighteen months of valuable internal and costly external resources.

Yes, it costs money to obtain patents—a lot of money, as we’ve discussed. However, what would happen if a competitor developed similar technology and managed to bring it to market—after your company chose not to apply for a patent?

Fortunately, the “file patent applications and iterate” approach of Silicon Valley disruptors does not have to cost a lot of money. Provisional patent applications can be filed for $140 or so and provide a one-year head-start until the more expensive full utility patent application has to be filed.  Interestingly, the response of patent lawyers at one very large consumer products company to the question of “Why don’t you file provisional applications?” was, “It is too hard to keep track of them.”

Wouldn’t any board of directors be interested in knowing how much money they’re throwing away on research that ends up with another company’s name on it?

Now that we have an idea of cost, timing and strategy on the “Make Side” of the Make/Buy question, let’s look at the “Buy Side.”

When discussing the acquisition of intellectual property, there are two options available: acquire the entire company or acquire a portfolio of technology.

Why Boards of Directors Should Assess IP During M&A

Traditionally, intellectually property was considered a risk factor during mergers and acquisitions rather than assets. Those managing M&A determined only if the target company for acquisition held the IP necessary to operate its business before then identifying the potential exposure to infringement cases or loss of licensing opportunities after the company changes hands.

This is a rather backwards approach to IP as a part of any merger or acquisition, and many companies are beginning to take note. With boards of directors on board, putting IP at the forefront of M&A deals could result in big boosts to bottom lines—or at least a chance to cut monetary waste for streamlined portfolios that build the business rather than weighing it down.

We assisted a $2 billion+ revenue brick-and-mortar based company that sought to acquire online providers to expand its business and move into the digital world. On their own, their M&A analysis team identified ten potential targets, one of which was a $200M revenue company (Big Target).   Among the other nine targets there was a $20M revenue company (Small Target).

After the traditional first pass of analysis, the brick-and-mortar company decided the Big Target was the best target, and for several good traditional business reasons, such as:

With all of this information in mind, it’s easy to see why Big Target appeared more favorable. However, none of this took the intellectual property of the Small Target and Big Target into consideration.

Fortunately, at this point during the merger, someone considered IP and how it might affect the acquiring company in the future. IPVision was able to provide rapid analysis of the various targets, including the Big Target and the Small target, as well as everything in between.

After a patent position assessment screening, IPVision discovered that the Small Target held key patents in the emerging space. Though they were only, at that time, a $20M revenue company, they had built a strategic portfolio that provided significant potential for innovation and, eventually, increased revenue.

The Big Target, on the other hand, presented a high risk of future patent litigation due to the patents held by Small Target. A merger with or acquisition of the $200M Big Target could have been immensely disruptive to Acquiring Company’s management and business and severely undercut the potential for success.

Instead, IPVision recommended acquiring Small Target to access the intellectual property rights in question, and then use that when determining an acceptable price for acquiring the Big Target.

Bringing Due Diligence Into the Board Room

The potential pitfall this acquiring company avoided could—and does—affect many other companies that don’t put IP at the forefront of their M&A considerations. For this reason, above all others, boards of directors should take an active interest in the patent strategy involved in any mergers or acquisitions planned for the future.

In most cases, the review of a Target Company’s patents is handled by lawyers due to the potential complexity of the legal issues involved in prosecuting and enforcing patents. However, IP considerations involve so much more than legal analysis to achieve the goal of a due diligence investigation of a Target Company, namely the identification and allocation of IP-related risks.

Beyond the potential risks involved, there are also business considerations to take into account. With the analysis provided to the Acquiring Company in our previous example, a path to greater business success was presented—a path that included more stability within the intellectual property arena and also greater revenue down the road.

To achieve this goal a Due Diligence Team should be assembled consisting of technical, business, and legal experts, and intellectual property holdings of all potential targets should be assessed during the first round of due diligence.

As part of the merger or acquisition process Boards should seek answers from management to these IP related questions:

Without asking these questions, you really do run the risk of opening your company up not just to potential infringement cases in the future, but also loss due to waste or poor patent management.

Where Boards Should Address Due Diligence

Boards of directors should make sure that Management addresses patent due diligence early in the M&A process and often. At the highest level, these areas to address include:

To address these issues, you must first identify the intellectual property assets the Target Companies own. Next, identify your company’s ability to control those assets. To do these things, you must:

In an ideal merger or acquisition, the Target Company has already gathered the pertinent information, mapped its patent portfolio to the products it manufactures and the technology it licenses, and can directly point to the parts of the patent portfolio that protect various lines of business. However, rarely is the world of M&A ideal.

If you’re fortunate, the Target Company has done some basic analysis of its intellectual property. In most cases, however, the research—if done at all—will be scant at best. Target Companies often consider this type of analysis too time consuming to be performed during such a short time frame during the acquisition due diligence window.

If you have been building your cash reserves in advance of expected M&A activity when prices and timing are right, now is the time to prepare by researching and understanding the general intellectual property landscape in the sectors you are currently in or expect to be in the future.

[1]In 2002 the United States General Accounting Office released a study that showed that for small- to medium-sized businesses the minimum cost to obtain and maintain a single patent in 10 major industrialized companies ranged from $170,000 to $340,000 over the life of the patent ($247,000 to $494,000 in 2020 dollars). This includes initial lawyer fees, government office filing fees, lawyer prosecution fees and over the life of the patent, required maintenance and annuity fees.   The range depended on the technology field involved. Amounts are higher for larger companies because patent office filing and maintenance/annuity fees are less for smaller entities.  GAO-02-789 or http://cdn2.hubspot.net/hub/87167/file-705146185-pdf/docs/GAO_Report_d03910_-_Small_Business_Foreign_Patents.pdf?t=1491409502105