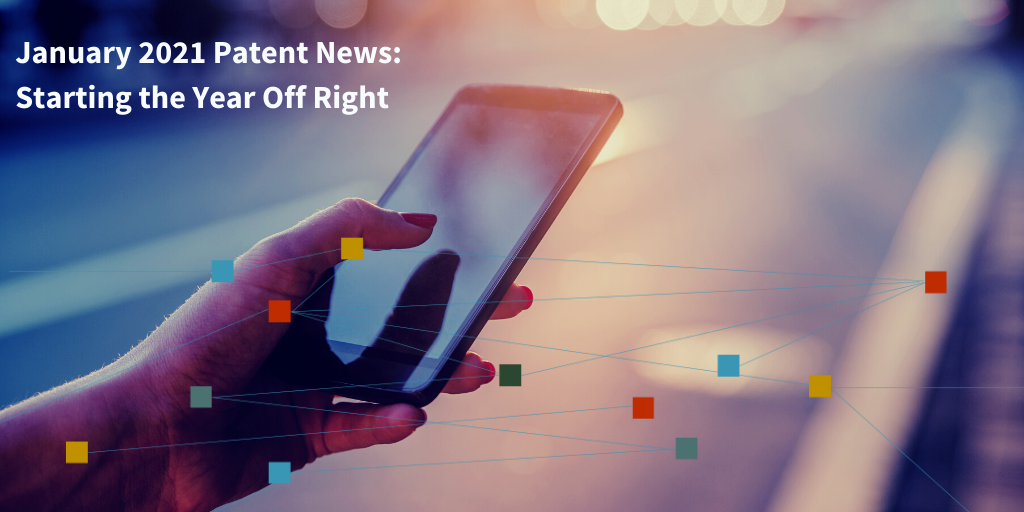 The year 2020 was a bust for a lot of people, but for many in technology advancement, it was a busy year. Patents to make the world safer moved quickly, but the thinkers kept going on from there. The result? Advancements in 5G, electronic charging, and smartphone design. See what else is coming in 2021.

Improved Efficiency from the USPTO in 2020 Should Continue This Year

As many are eager to move past 2020 and look back to reflect, how did the USPTO fare in the effectiveness of their work? Despite the previously unmatched number of filings to review, the office was able to improve in their efficiency, thanks to tireless effort from employees. What can be expected in the year to come? The USPTO continues to raise the bar in the service they provide. The aim is to continue to improve the quality of patent examinations, while reducing the examination time. Efficiency is the name of the game, which is great news for IP creators.

If you were worried that this year’s CES event might be cancelled due to your friendly neighborhood coronavirus, there’s no need to panic. Las Vegas did indeed host this famous technology and innovation fair from January 11-14. The event was held virtually this year – a fitting display for a tech event. Making sure to keep the event going was important to planners so they could show the world that innovators were still at work making the world a better place. The virtual platform allowed exhibitors to interact with bigger audiences.

Products being presented focused mainly on 5G networking, while health and safety was also highlighted. Hopefully, some of the exhibitions could be useful throughout the rest of the pandemic to speed up a return to normal settings again, such as the possibility of an in-person CES 2022.

Roll-Up Smartphone by LG a Headliner at the CES

If you’ve ever debated the pros and cons of buying a tablet as opposed to a phone (or vice versa), the time is coming where you may not have to choose. One of the most exciting events at the 2021 CES was LG’s presentation of a roll-up smartphone. The structure is flexible enough to roll and unroll like a piece of paper to extend or contract the size of the image you are viewing. The launch date for this nifty piece of tech has not yet been announced, so until that time comes, you will still have to pick between tablet and smartphone for your daily use.

The LG roll-up smartphone has an OLED (Organic Light Emitting Diode) display. The first practical OLED device was made in a lab in 1987. Advances in polymer chemistry soon had futurists thinking about flexible surfaces that could contain OLED films. One of the earliest U.S. patents was US 5,707,745 Multicolor organic light emitting devices, which was filed in December 1994 by Princeton.  It has been cited over 1150 times:

LG introduced the first roll-up smartphone 26 years later.  This is a prime example of the length of time it can take for technology to make it to the market. The Princeton patent has, of course, expired. LG has made significant investments in OLED technology as demonstrated by this Patent Citation Interconnection Map showing the 718 U.S. patents owned  by LG that contain the word OLED in the Title, Abstract or Claims. There are 111 Green Stars on the map showing the patents that also contain the word “flexible” in the Title, Abstract or Claims.

Hot Water – The New Way to Charge Your Phone

In some houses, finding an available smartphone charger can be quite a challenge. However, it may soon be possible to charge your phone with the use of hot water. Developers in China are working on a chip that can be attached to a water bottle or thermos with the purpose of diverting the thermal energy from the water to small electronic devices. Up to 30 minutes of additional power can be generated to devices such as phones, watches, tablets, and the like. Now, instead of your kids yelling at each other for a charger, they’ll be yelling at each other to take shorter showers.

There’s no time like the present for moving forward on your IP ideas. If investigating the patentability or setting that idea into motion was one of your New Year’s resolutions, get in touch with IP Vision for guidance through the process.