How to Beat Competitors in the Race to Innovation

All too often, companies face disruptive innovation from their competitors. And all too often, they combat the problem by simply copying the new technology. Whether they roll out a similar product or service, or they throw money behind developing their own version, these companies will spend the majority of their existence simply chasing others.

Losing market share is a scary thing, but it doesn’t have to spell disaster. Learn from the poor choices of the past—some of which we’ve already discussed—to avoid constantly chasing after your competitors. But how can you regain that market share when those competitors innovate more quickly than your company?

Too often, companies wait until they feel the squeeze from innovative competitors. As business moves increasingly to the digital world, with giants like AirBnB and Uber disrupting previously stable industries, companies have been left scrambling to create solutions that not only please consumers, but also lure them back with their wallets in hand.

The problem is that many companies have no idea how to detect changes in the market. How can they be ready to pivot and enter new spaces in the market if they don’t know what’s going on?

Simply understanding that your competition is innovating right now, even if you don’t yet see the result of that innovation, puts you one step ahead. Hailo, a popular app for hailing taxis in Europe, is a solid response to the rise of Uber and other rideshare options, but it didn’t come quickly enough to stop the squeeze on the taxi industry. 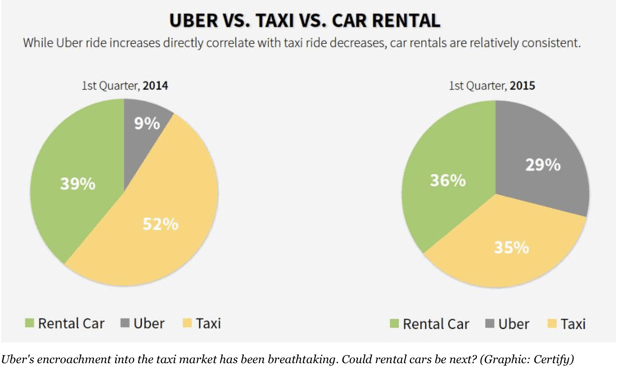 So, how do you know where that innovation should occur?

Your first thought is probably to start investing in hours of market research to see what consumers want. While, yes, market research is important, it should never take the backseat to understanding the intellectual property that has already been filed within your general industry. A look at what other companies have filed will give you an idea of where they plan to go with their next steps.

Instead of waiting, put a plan in place that prepares your company for changes in the market. It’s always best to look forward and begin innovating without that nudge from a drop in market share. What if a taxi owner, well before the arrival of Uber, had listened to a customer complain about how long it took to flag down a cab? What if that driver had heard conversations about how terrible the previous driver had been and how there should be ways to warn the public about bad cabbies?

Had Hailo entered the market before Uber simply by investigating the possibilities before the taxi market was crushed by rideshares companies, they would have had the opportunity to investigate this vast white space available to them.

Innovation is only one way to stay ahead of the crowd. You can also identify IP for your company to purchase. Your investigation of the IP landscape will show you the various patents that have been filed, so you can begin to identify potential acquisition targets.

Your question will always be “make or buy?” Your finger should be on the pulse of the market place so that you can immediately detect a shift. When that shift occurs, you can investigate the disruption. Let’s go back to Netflix for just a moment. When they entered the industry with their mail-order DVDs, there was a mad scramble to copy. What if Blockbuster had taken one look at their business model and said, “We can do better.” What if they’d used the opportunity to enter the home streaming market before Netflix knew what hit them? In this particular case, making something bigger and better should have been the response.

Sometimes, however, buying the current technology is the best way to beat out competitors. We discussed Gillette in our last blog. Instead of investigating the possibilities of buying out Dollar Shave Club, they also opted to copy the business model. What if they’d simply purchased the innovation for themselves? Instead of two shave clubs (well, there are more, but these are the largest ones), there would be one large entity—Gillette the giant—selling top-quality razor blades both in stores and by subscription model.

Right now, in spite of Hailo’s staggering loss in Europe and complete ouster from the American market, Daimler has purchased the company with the intention of finally beating Uber at its own game. Was this the move to make in their race toward the top? Without a thorough analysis of the IP landscape, we won’t know until they win big or lose again.

The first step to racing ahead of your competitors is awareness. Without acknowledging that disruption could happen at any moment, you can’t possibly be ready to beat them at their own game. Call us now to schedule a thirty-minute strategy session. We’ll get you ready to run.