How Good is the Company’s Patenting Process? 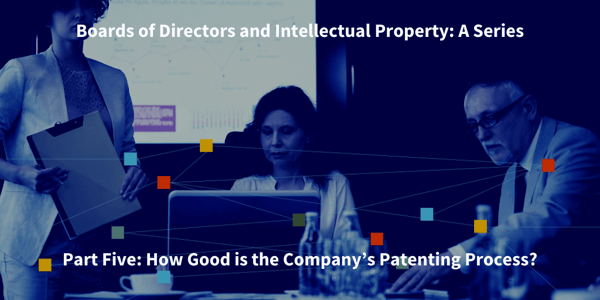 It’s easy to assume that a company has a good process in place for determining what to patent. Unfortunately, this is often not the case—even for large companies with resources. Certainly, some inventions should come from planned research and development.

These are the two major sources for the “patent funnel,” which has to be vetted by the company, usually through the establishment of a Patent Review Committee. Ideally, the Patent Review Committee is considering the protection of two things: (1) current and planned products/services and (2) revenue streams. Well-functioning Patent Review Committees also consider whether an invention supports strategic business objectives, like limiting a competitor’s expansion room.

Well-managed invention disclosure programs can elicit new business ideas, but this doesn’t happen as often as it should.

As “normal” as a Patent Review Committee entirely composed of scientists and engineers may be, we believe it’s important for Boards of Directors to also be involved, at least on some level, in the decisions about the technology being developed and the patents that will ultimately result from that technology.

Patent Review Committees should work with a set of parameters that ensures decisions are held to specific metrics—key performance indicators—for the strongest possible patent portfolio. While many of these metrics may vary between companies depending on size, money spent, and the number of patents ultimately applied for and granted, several performance indicators should exist on every patent review committee’s list.

How Good Is the Company’s Patent Prosecution Operations?

As we have seen, looking at R&D Spend per patent application filed is a measure of the efficiency of the invention disclosure and capture process. The next question is whether the Company is actually obtaining patents, -i.e., what percentage of the Company’s patent applications result in issued patents? If a large percentage of applications are abandoned[1]it could be that there is prior art that should have been found before filing or it could mean that the lawyers prosecuting the applications are not doing a good job. A related question is: How much is the Company spending on patent prosecution? The patent prosecution spend data is known by the company but is not public, so it is hard to do peer comparisons on this issue.

So, we've talked about strategy. We've talked about process. Next time, we'll discuss the patents themselves. How can you determine if your company actually has good patents? If you want to know, watch for Part Six.