How Efficient Is the Company in Generating and Capturing Inventions from R&D? 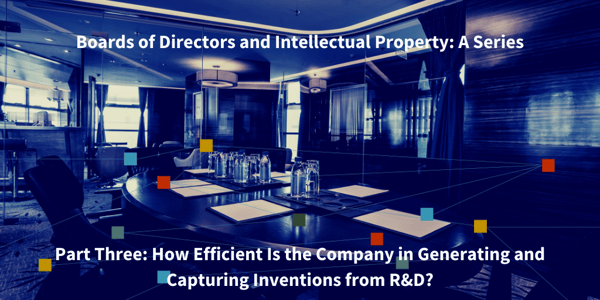 In our last installment, we discussed the absolute and relative spend on research and development, and how Boards should certainly be sure to keep watch over these expenditures.

There are two reasons for starting here: (1) the amount of time from filing to patent grant can vary greatly (two to four years is typical for many technology areas) and (2) not all applications result in issued patents as a result of the patent examination process, prior art, etc.

A few observations on this chart are in order.

If new fields of research increase the amount of R&D dollars spent in relation to the patent applications for that year, it’s not necessarily a bad thing. The important takeaway is to keep a close eye on that line of research to ensure it doesn’t become so unwieldy that you find, years later, that your ratios have fallen out of balance.

That new line of research should follow through later with additional patents to justify, in a sense, the expense of your research. Those patents should then lead to new products, which we’ll explore in our next installment.