December 2020 Patent News: Safety for All Creatures Great and Small 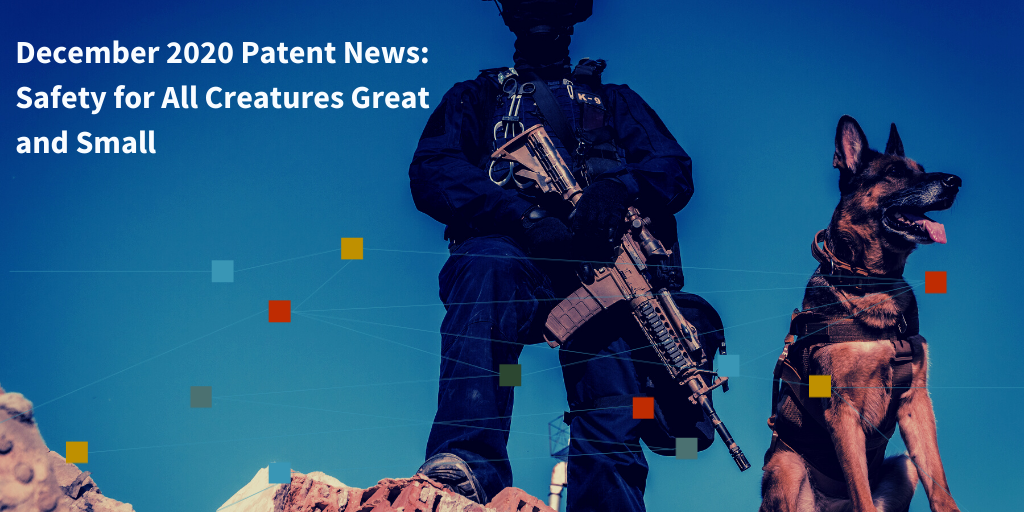 From dogs in the military to factory workers standing side by side at work, to women at risk of breast cancer, scientists are working on inventions to protect all of them. And while we’re at it, let’s talk about safety of lunar rovers. Need to hear more for this to make sense to you? Read on.

If you ever watched Pixar’s movie Up and wished that your dog could understand you and communicate with you like Doug, the time has come. The United States military has been in the process of developing augmented reality for dogs. Because these soldier dogs are often in the line of fire, they can’t always find their human to guide them from danger. Providing them with specially designed AR glasses can help them get to safety when needed. So it may be a while until such a communication device is available for civilian pups, but for now, dogs that keep us safe may have their own means of safety as well.

Command Sight is the company that is working with the US Army on this project.   Its 3 issued U.S. patents are shown on this IPVision Landscape Map (yellow shaded boxes).  They cite 33 other U.S. patents (green shaded) as prior art.   Those 33 patents are cited by a total of 507 U.S. patents.   Four of these (cyan shaded) contain the words “animal” or “dog” in the Title, Abstract or Claims. A Smart Bracelet Called Dist-i Can Help with Social Distancing

With social distancing becoming the new reality in the age of superspreading diseases like Covd, the Italian company RD Vision International, along with Medici Automazioni have developed their solution to help those who work in close quarters. The Dist-i is a smart bracelet that can detect when someone with a similar bracelet is within 5 meters of the person wearing it, effectively creating an invisible shield. When another bracelet crosses the shield, the bracelet will vibrate to warn the wearer to move. Such a device could help prevent transmission of highly communicable diseases and help keep pandemic-level events under control, especially now that we know how possible that can be.

A New Home Test for Breast Cancer Could Save Lives

Breast cancer is a reality for far too many people in the world. Although this cancer has a very high recovery rate when detected early, it become less curable the longer the patient goes without diagnosis. Aware of this problem, a researcher from Spain, Judit Giro Benet, developed a test for breast cancer that can be done at home using the patient’s urine. After the urine is placed in a box, it is tested for several markers of the disease. Results are then uploaded to an app on the patient’s phone. Results have a classification of 95%. For those who do not have the time or money for a mammogram, this invention could literally be a lifesaver.

The patent space around Breast Cancer illustrates the among of research and innovation that has been going on to combat this disease.  A search of US patents for the phrase “breast cancer” in the Title, Abstract or Claims yields over 23,000 applications or issued patents.  Refining that search to “breast cancer” and urine yields the 702 patent properties shown in this IPVision Patent Citation Interconnection Map. The coming year should bring a NASA Mars landing if all goes according to plan. With this landing, there is hope for a great deal more research to be done on the planet than ever has before, necessitating a stronger, heavier rover to explore the terrain. The problem is that the rover will be too heavy as it is sent through Mars’s atmosphere, especially at the speed of 20K kph, and risks being destroyed on impact. Rocket engine program, ASPIRE, has taken on the task of developing a parachute strong enough to withstand the supersonic speeds and weight of the rover as it lands. Recent tests on the parachute have been successful, which is promising in keeping the rover safe and the mission on track.

Is your invention the next big thing to help keep our world, or even another world, safe? Or does your IP serve another purpose? No matter your goal, IPVision can help you get to the next step.