Patenting your inventions and ideas is a smart move. It allows you to capitalize on unexpected trends in your industry and gain exclusive rights to your designs for a set period of time (assuming you stay up-to-date on your patent fees).

So what happens when the innovations you patent actually cause discomfort among your target audience members?

This is the dilemma that Facebook is in, as many of their patent applications over the past few years have struck consumers as creepy and downright invasive.

Let’s take a look at some of the creepiest patents Facebook has submitted recently.

The Emotion-Sensing Keyboard and Texting Technology

Basically, Facebook wants to know how fast and hard you’re typing when you’re composing a message and whether or not you’re using any particular keywords, so they can match what you’re saying to an appropriate emotional context.

This patent, many observers have pointed, actually does solve a common issue many people have with texting: they can’t get their messages to reflect the correct emotional nuances.

On the other hand, many users seem to find it creepy and don’t want Facebook peeping into their private conversations.

The Camera “Fingerprinting” and Tracking System

Another patent filed in 2015 that has users reaching for the “dislike” button is the camera fingerprinting patent.

This patent covers a method for creating “fingerprints” that attach to particular cameras and photographs…and match those photographs with particular social media users.

Essentially, Facebook wants to analyze images uploaded by users and determine the unique signifiers of the cameras used to capture the images.

The patent even discusses looking at things like the user’s style of naming image files, and using that information to create “inferred” connections between the original user and other users.

Even if you’ve chosen to forego including metadata on your images (or have chosen to delete preloaded metadata after uploading), Facebook will use more sophisticated methods to track your images and your connection to those images. Unique features of your personal camera, like broken pixels and lens scratches, can be used to trace your images back to you.

Facebook currently has around 1.94 billion monthly active users—roughly 20 percent of the world’s population. That’s a lot of photo tracking, and a lot of users whose privacy would be invaded if the patent is approved. 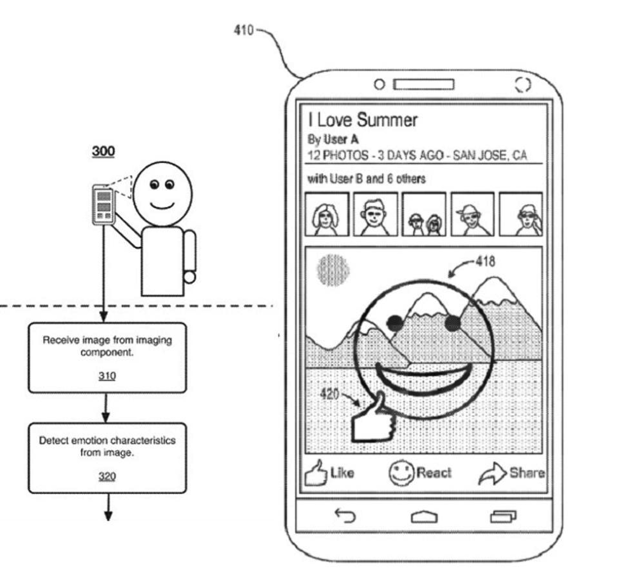 Perhaps the most bothersome of Facebook’s recent creepy patents is the emotion-detecting smartphone camera.

Yes, you’re reading that right: Facebook has applied for a patent on an emotion-reading smartphone technology. It actually spies on users through their smartphone cameras and reads the emotions on their faces as they scroll through their Facebook feeds.

Facebook’s patent also states that the images captured and emotions calibrated by the technology will be stored in a storage component for a “defined period of time.” Essentially, Facebook is patenting technology that will keep a storage file of your emotional responses. It can then use that information to serve you “better-targeted” ads, content, and other media.

Will you be able to opt out of this technology, should it arrive on smartphones within the next few years?

Well, according to the patent, you may be able to, depending on your operating system.

The patent states that an operating system may offer the option to change privacy settings to restrict Facebook’s smartphone camera-spying technology. So that’s comforting at least.

A System for Detecting Boredom

This patent, applied for in January of 2017, is another of Facebook’s attempts at tracking user behavior as they interact with their Facebook feeds.

The patent describes a system for detecting boredom in users by tracking their movements as they scroll through Facebook’s app.

The technology would present users with an initial set of content items in their Newsfeed, and then track whether or not the user pauses on any of the content items for an amount of time that meets a prescribed threshold.

The patent also describes a method for receiving information on users’ eye placement as they scroll, using (you guessed it) the “image capture device” housed on the user’s phone.

So, do any of these patents provide Facebook with the ability to better deliver on its users’ expectations and desires, as it claims they’re meant to?

We have yet to see. Many of these patents haven’t received approval just yet.

But Facebook is certainly leading the charge in innovations that put user reaction at the center of its products’ performance. For users who desire a more optimal Facebook experience, personal privacy might be a small price to pay.

We’ll keep you posted on any other notable Facebook patents that surface this year.

Speaking of Staying Posted on Patents…

Facebook’s competitors should pay attention to users’ reactions to these latest patents, especially considering the reaction to the social network’s previous forays into emotional manipulation.

After manipulating users’ Newsfeeds as part of a social experiment in 2012, Facebook faced incredible backlash and issued a statement saying they had committed a serious misstep.

As your company continues to innovate, it’s important to keep track of your competitors’ innovations and how your user base reacts to those innovations.

If you’d like to know more about innovations and IP in the tech and social media sector, IP Vision is your information partner.

We have patent experts, a cutting-edge patent database and patent analytics tools that will help you stay ahead of the innovation curve.