This Multi-Patent Landscape Map shows the 5 U.S. Patents that IV alleges are infringed.

The boxes with the Green Stars are the IV patents in this lawsuit.

To the right of each Green Star are the patents that cite the IV patents.  These include 23 Micron Technology (red top boxes) patents. 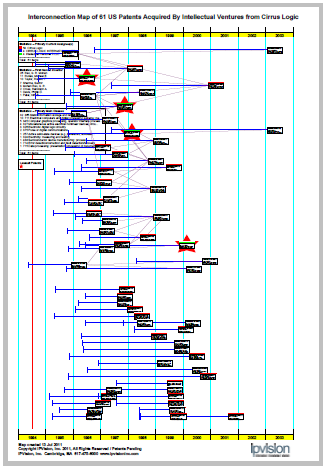 The 4 Cirrus Logic patents in the IV lawsuit are part of a group of 61 patents that Intellectual Ventures acquired in 2010.

The 4 Cirrus Logic patents in the lawsuit are marked with Red Stars on this IPVision Patent Citation Interconnection Map, which shows the patent citations within this group of 61 patents.   Note: Click on the Patent Map Image on the Right to View the Map Interactively.

See a Patent Citation Analysis showing the companies and patents citing and cited by these 61 former Cirrus Logic patents.