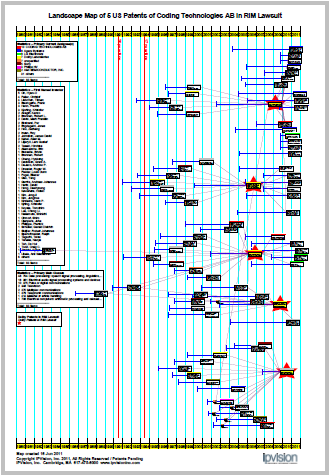 This Patent Landscape Map shows the 5 U.S. Patents that Dolby alleges are infringed.

The boxes with the Red Stars are the Dolby patents in this lawsuit.

To the right of each Red Star are the patents that cite the Dolby patents.  These include Agere Systems (blue top boxes) and LS Electronics (green top boxes).   Most of these patents are so new that they haven't been cited by other patents... it will be interesting to see how this patent landscape develops over time. 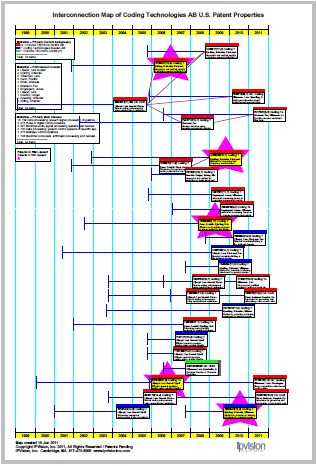 An IPVision Patent Interconnection Map shows the citation relationships between a group of patents - here the Coding Technologies Portfolio.

The patents with the purple stars on them are the 5 patents that have been asserted against Research-in-Motion.

The Coding Technologies Portfolio has been cited by 102 other U.S. patents as of June 2011.   The Top Owners of these patents are:


Are these the next targets for Dolby Laboratories?