According to the Complaint "Google’s Android competes with Oracle's Java, acquired with Sun Microsystems, as an operating system software platform for cellular telephones and other mobile devices.  The Android operating system software “stack” consists of Java applications running on a Java-based object-oriented application framework, and core libraries running on a “Dalvik” virtual machine (VM) that features just-in-time (JIT) compilation Google actively distributes Android (including without limitation the Dalvik VM and the Android software development kit) and promotes its use by manufacturers of products and applications." 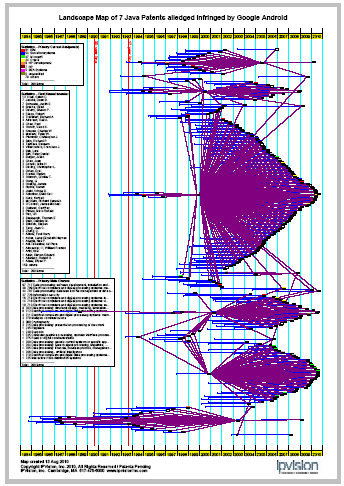 The large "fan" is US Patent 5,966,702 "Method and apparatus for pre-processing and packaging class files".  It has been cited by 124 other patents, including 32 patents owned by Oracle and 16 owned by Sun Microsystems/Oracle.

The patents are also available for download by right-clicking on them in the patent map.

Oracle Has Abundant Patent Ammunition for This Fight 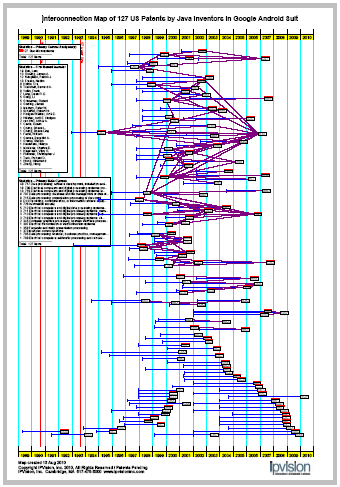 The inventors on the 7 Java Patents have 120 other issued U.S. patents that are owned by Sun Microsystems/Oracle .   Although Oracle chose to assert only 7 of the 127 patents, the other 120 may prove to be valuable ammunition in the negotiations around this suit and the emerging smartphone hand held device industry.

This IPVision Patent Interconnection Map shows the 127 issued U.S. Patents by the same inventors that are on the 7 Java Patents in the Google Suit. The 7 Java Patents are highlighted in yellow on this Map.

This lawsuit also illustrates how companies, such as Google, should proactively monitor changes in their patent landscape. As we have written about before, patent risks change and evolve as companies organically grow their patent positions and, as in this instance, acquire patent rights through M&A.

This perspective is further illustrated by the perspective shared by Silicon Valley litigator Edward Reines in Reuters initial article on the lawsuit: "Sun's corporate philosophy was obviously very different from Oracle's in terms of enforcing the Java patents."