What Happens When a Patent Application Cites Incorrect Prior Art? 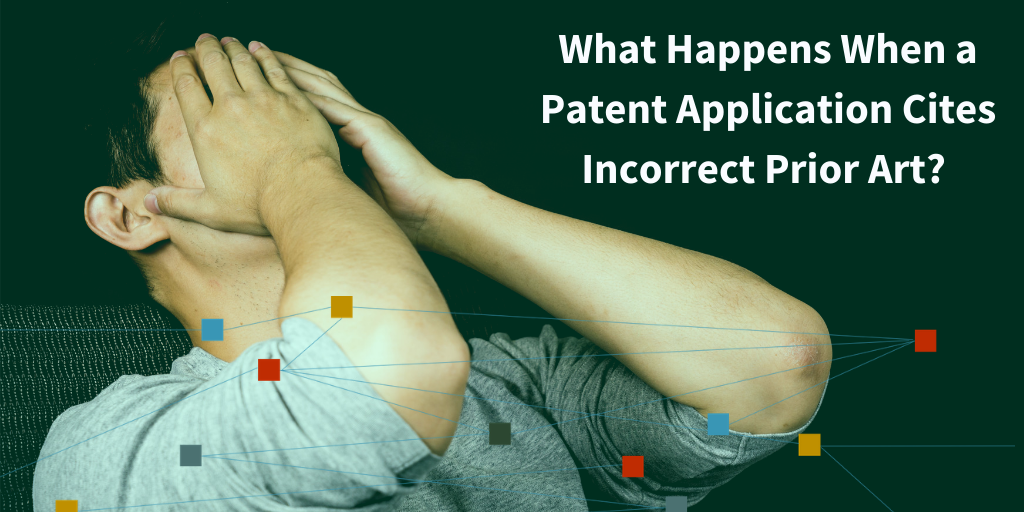 Generally, reporting patent news is interesting for the technology and business aspects. On occasion, however, we run into headscratchers—those little inconsistencies that make you go “hmmm…”

This month, we reported on Monopoly—don’t worry, we won’t rehash that. You can read about it here. The interesting thing that we found while creating a patent landscape for the news report was a patent that cited one of the Monopoly patents that didn’t seem to have much to do with board games.

Here’s the patent map we created. There’s a lot going on here, so I’ve circled the patent in question: a cap for an inhaler device. You can also click the image for an interactive version on our See the Forest site.

Now, that got us wondering: What on earth does this particular patent have to do with the prior art it cited? To help you out a bit, the prior art cited was a game board. The first reasonable answer is that someone cited the wrong prior art.

So, what happens when prior art is incorrectly cited? A few things couldhappen. If the inventor knowingly failed to cite relevant prior art it would be the basis to invalidate the resulting patent’s claims because of “fraud on the patent office.” If there was simply an error in writing down the number of the patent that was meant to be cited, it is still possible that some or all of the claims could be invalidated because of the prior art represented by the incorrectly cited patent which the patent office examiner did not investigate. However, we find in most cases such as these that mistakes of this type are forgiven if the correct citation is located and presented during the court case.

In other words, nothing super dramatic happens. However, there are some repercussions that could affect the creator of the technology or design that the inhaler device cap patent intended to cite.

We decided to dig around a little bit to see how the true prior art may have been affected by this mistake—regardless of the fact that (s)he probably has no idea the patent should have been cited at some point.

First, we had to find the patent that should have been cited. The inhaler cap patent cited D349522. With a little bit of finagling—meaning we searched patents for other inhaler caps and similar technology/design, we found patent D349572, specifically an aerosol inhaler. Looks like a simple enough mistake, ‘572 instead of ‘522.

Here it is in map form, with the game board citation circled: 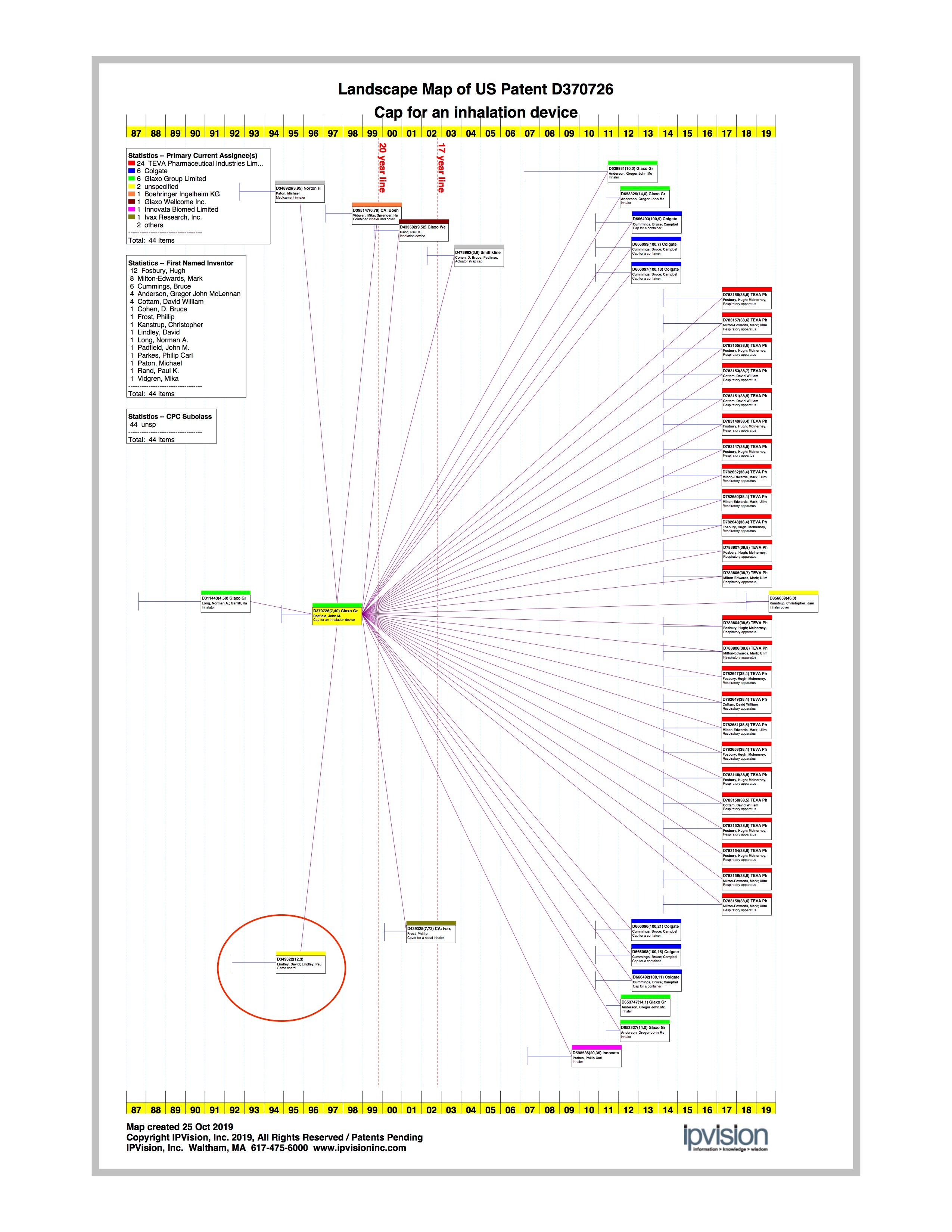 Remember, you can click the image itself for an interactive map.

Now, one thing that really stood out to us as we studied this particular map is how many later patents cited the inhaler cap, noted on the map with a yellow shaded box. All of those patents now also show a game board as indirect prior art, instead of the inhaler patent that it should be. This is just one step forward. What happens when we look even further ahead at the second level forward?

Following is a map of later patents that correctly cite the inhaler patent. We’ve circled the D349572 inhaler patent to help you locate it. 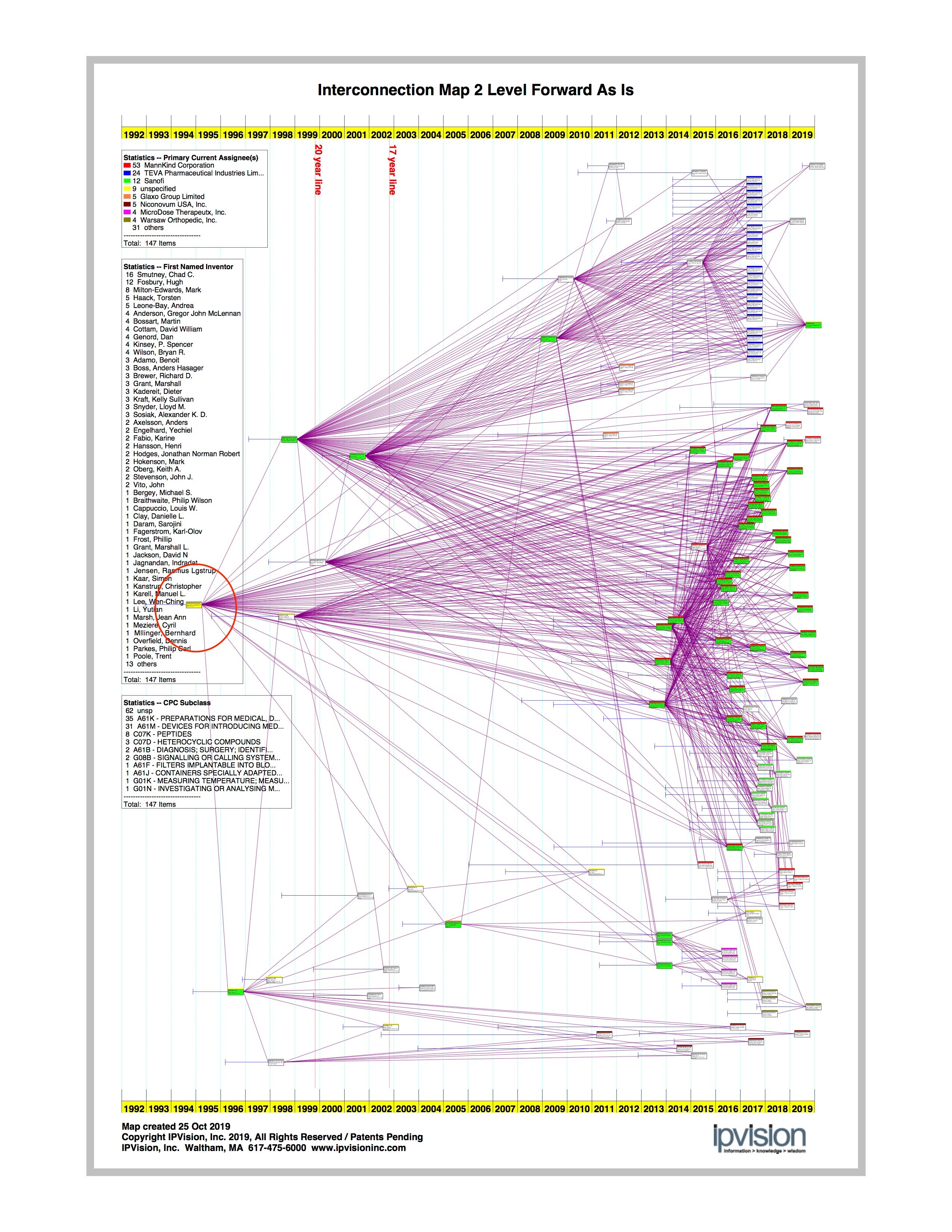 This map features 146 forward citations as it is. Now, what about those citations that should have happened, such as those pictured above, mistakenly citing a board game patent?

With a little bit of See-the-Forest magic, we were able to determine how many patents should cite D349572: 156. It’s not a big difference, but there is a difference.

The map, with correct prior art citations, should look like this: 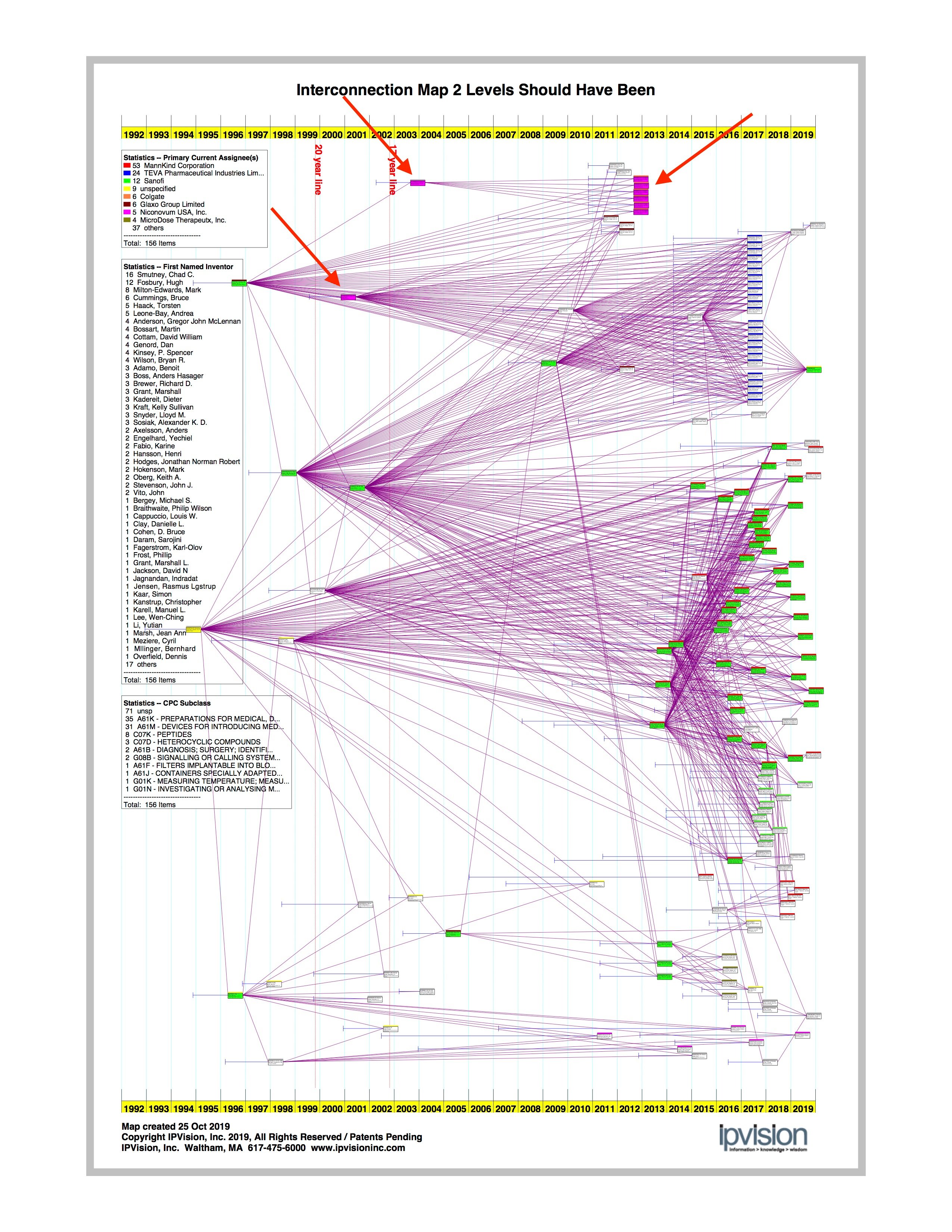 The pink patents there, noted by the big red arrows, illustrate the forward citations that the original inhaler device doesn’t get credit for.

If you’ll take a look at this patent that we’ve circled here in the next map, you’ll notice that this enterprising soul cited both the correct and the incorrect patent. 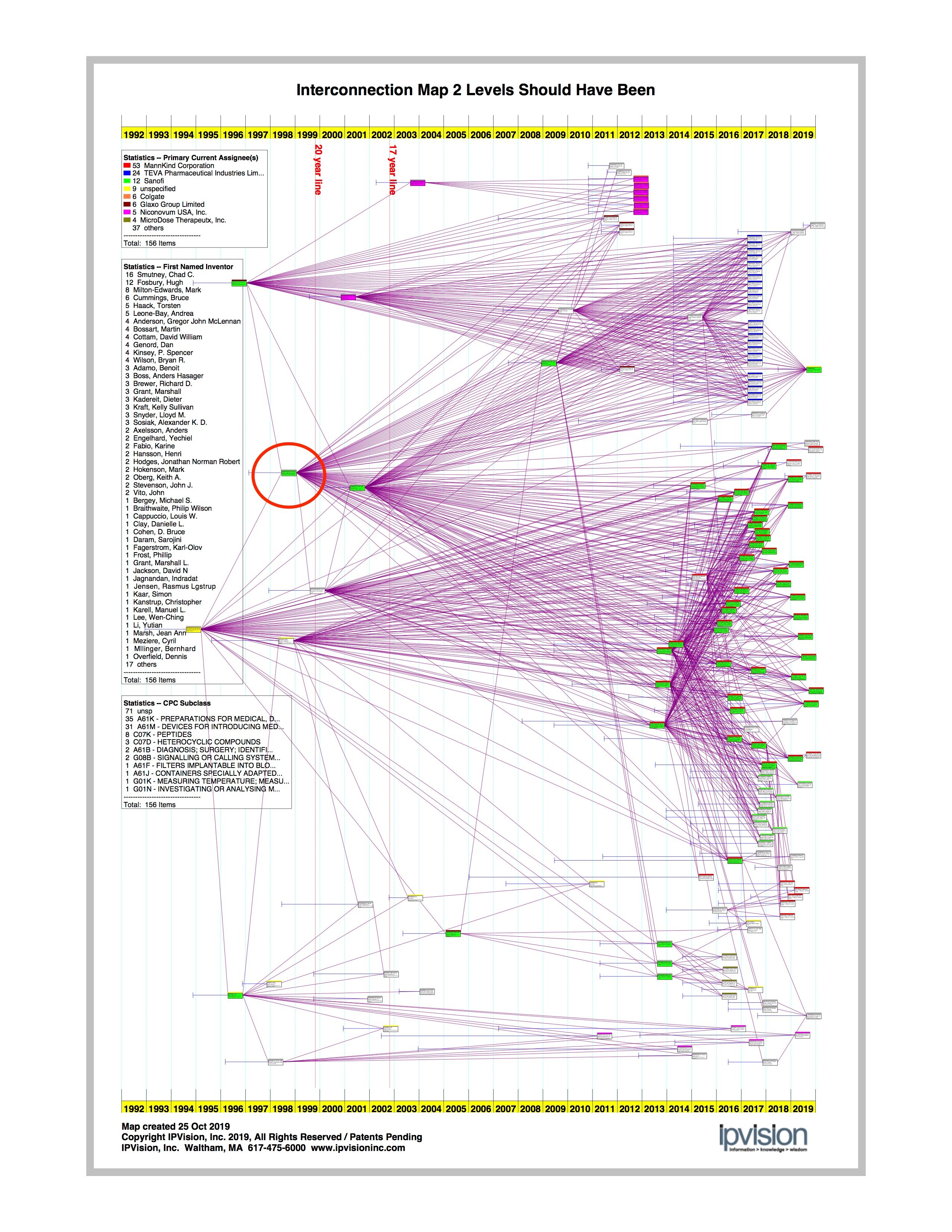 For that reason, only the nine at the top of the map were left out of the “as it should be” map. Had that patent, which was then correctly cited by several following applications, not cited both the correct and incorrect patent, who knows how many citations the designer of D349572 never would have gotten credit for?

Now, this has been a fun exercise for us, but does it really make a difference in the grand scheme of things? As it stands now, not really, especially because of that one patent that managed to somehow tie the mistake and the correct citations together for a nearly complete forward citation list.

There are likely hundred or even thousands of mis-cited patents throughout history. We just happened to stumble across one that we could deconstruct.

However, there are a few things we learned: First, that an inventor out there hasn’t received full forward citation credit for his work, which, while not likely important to his specific case, could affect inventors and designers in other similar cases.

Second, someone in the USPTO didn’t look too closely at that application before awarding the patent, did they? It’s easy to make mistakes with so many patents and file numbers in our patent system, but that mistake could call into question the strength of the application that made the mistake, patent D370726.

Finally, we learned that visualizing the patent map really opened up understanding of the situation. Like we said, sometimes people just see lists of numbers and letters over and over. Only when you get a visual aid, like our See the Forest tool offers, can you get the full picture.

Our See the Forest tool is free for you to use, by the way. After you sign up, we’ll send you information on how to conduct searches for yourself so you can get the big picture, too. And, of course, we’re always here to help.