It’s important to remember that patents can be issued not just for life-saving medical equipment – and hopefully diagnostic methods – but also on board games, like Monopoly. And these patents can be developed by anyone, male or female. However, even if your patented game says you will earn 15% more for your endeavors if you are female, this doesn’t always translate to the real world. Sometimes the best you can hope for is a little credit on the box. For now, anyway.

Hasbro is releasing a new version of their classic board game, Monopoly. This version, named Ms. Monopoly, was developed to recognize female inventors and entrepreneurs by paying them a percentage more than males. However, one facet conspicuously missing from the game is a nod to the woman who invented the classic, Elizabeth (Lizzie) Magie, who received the patent in 1904 for The Landlord’s Game which was the predecessor to Monopoly. Monopoly itself was long credited to Charles Darrow, who was the one who actually sold the game to Hasbro. A brief credit note of credit is offered to Magie in the new Ms. Monopoly box, a pioneer in the field of politically-related games.

IPVision doesn’t normally go back as far as 1904 when it makes its patent maps – in fact we don’t have that patent in our databases for mapping.  However, we did find 5 U.S. patents in that cited Magie’s U.S. patent 748,626 as prior art.   Those patents contained the following noun phrases in their abstracts:

We did run a patent landscape map of these 5 patents, noting that 17 of the patents they cite are not in our database because of their age. 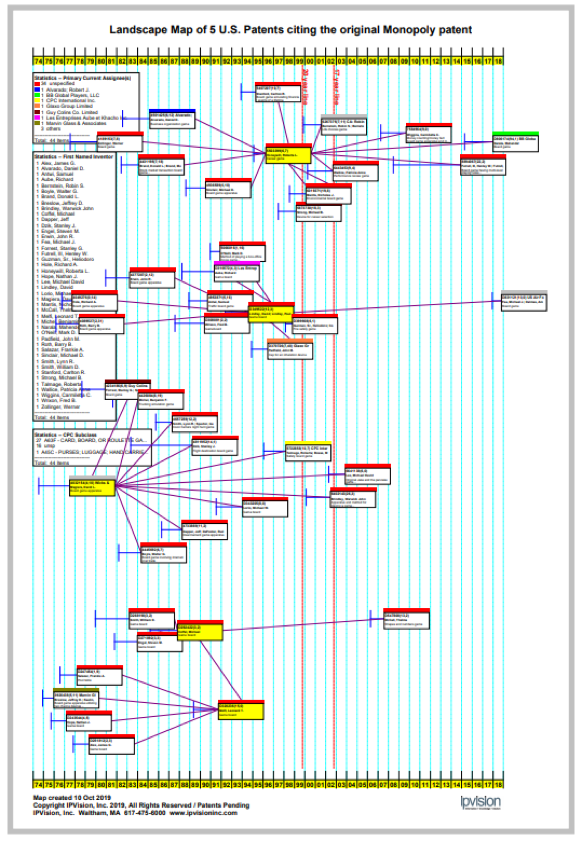 The red vertical lines are 17 and 20 years ago – the patents whose left edge is to the left of these lines have expired due to the passage of time.

This is a 2 level forward map starting with the 5 patents that cite the original Monopoly patent. 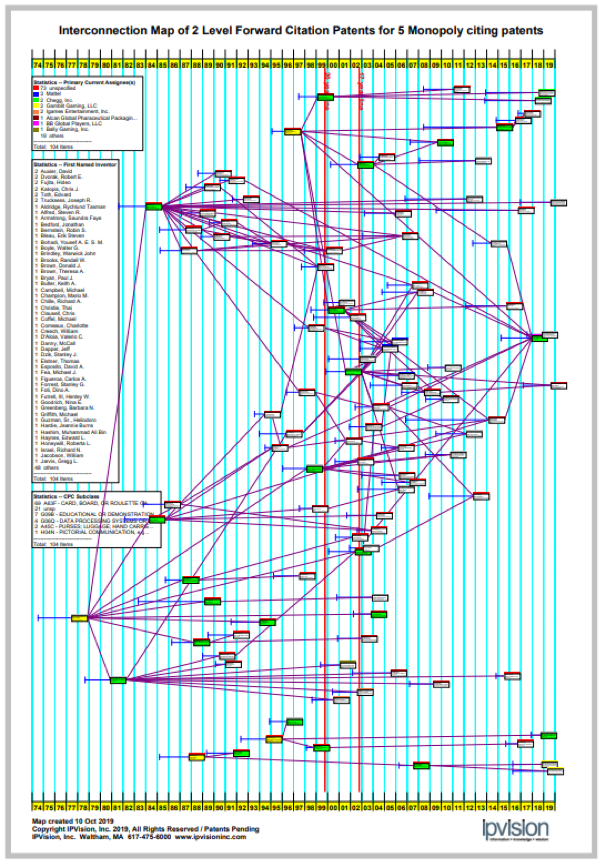 The 5 patents are shaded in yellow and the 22 patent that cite them are shaded in green.  Most of the boxes on this map are still owned of record by the inventors; they are the red-topped patent boxes.  It appears that getting discovered by a toy company is not easy.

Patent Trolls on the Rise

File this one under “Watch out for what you don’t see coming.” Rothschild Patent Imaging (RPI) is a non-practicing entity (NPE). What does their company do, if it isn’t producing products or performing services? RPI makes collects its entire revenue from patent lawsuits; with lawsuits against 141 defendants, it’s the very definition of a patent troll. Most recently, RPI has filed against the company, GNOME, for infringing on its patent for wireless image distribution. The original patent was filed on a deliberately vague premise in order to trap those thinking they are merely using the technology available to all for importing and sorting pictures. GNOME was trapped by the troll, and is now awaiting trial to see if a jury rules that they were only using technology obvious to all or if the patent will stand in their way.

Interestingly, the patent in question (US Patent 9936086 Wireless image distribution system and method) cites only 14 other patents or patent applications as prior art.   Of these 7 are owned by Invention Science Fund, which is owned by Intellectual Ventures, arguably another troll.

Patent for Heating and Cooling Seats Comes from Tesla

One favorite option in new cars for years has been heated seats. Designers at Tesla have realized that cooled seats are just as important to some people. In the past, car seats have achieved these temperature goals by using electric sensors for heating and ventilation fans for cooling. By using a layer of fluid within the seats, Tesla’s new seats will be heated in a similar fashion as before, though now by electrically heating the fluid. However, to cool seats, the fluid will use a refrigerant similar to what is used for air conditioning. This should speed up the cooling process, leaving your rump ready to roll even sooner.

This is a relative “white space” for patenting.   This is an IPVision Interconection Map showing the 100 U.S. patents and published U.S. patent applications in CPC (Cooperative Patent Classification) class B60N 2/56 (Seats specially adapted for vehicles; Heating or ventilating devices).   Companies patenting in this space include Ford, Toyota, Daimler and Hyundai. 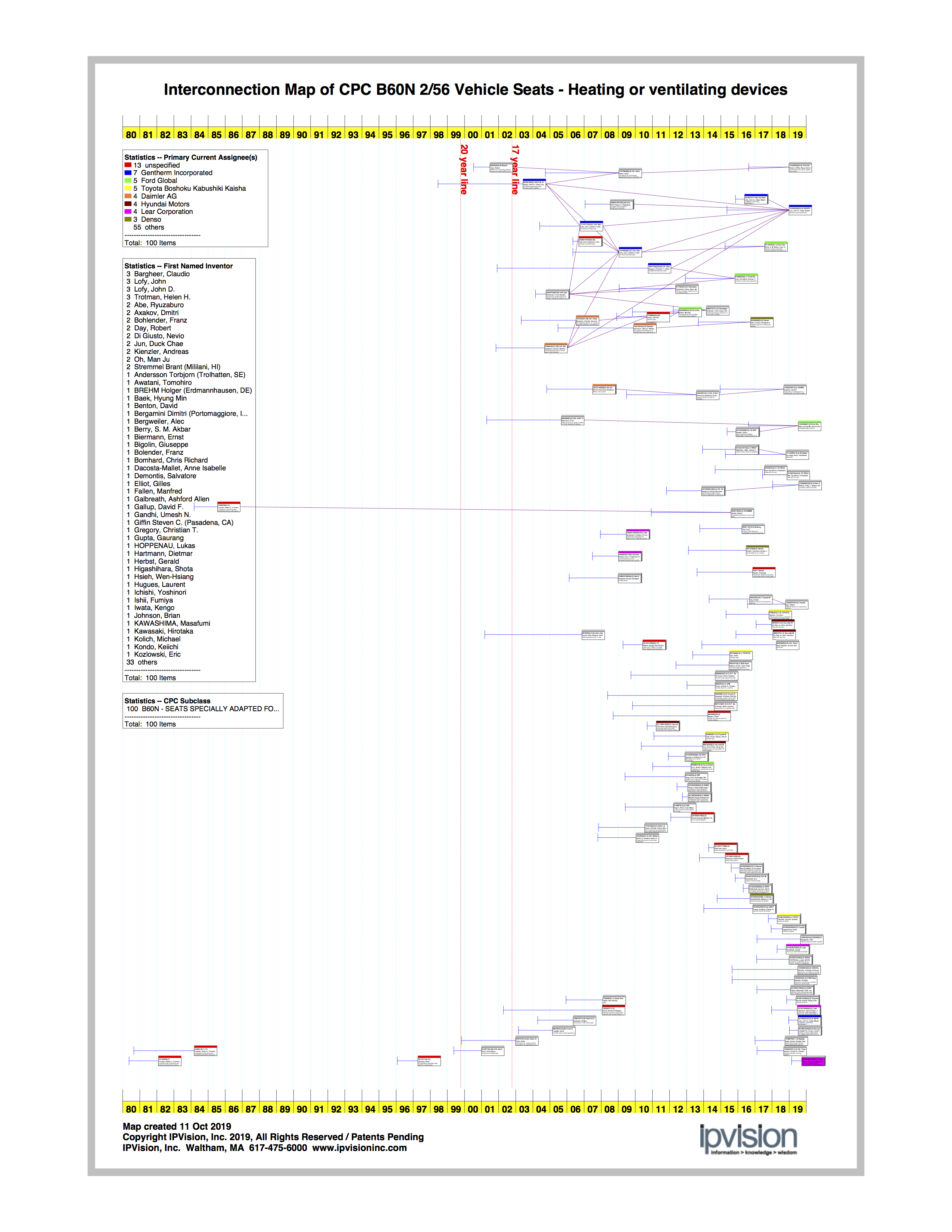 Are you looking for advice about your latest IP endeavor? Let IPVision help you out by guiding you on your journey to a patent.