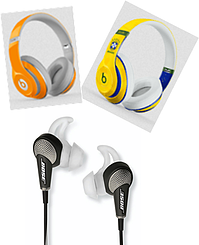 Interestingly the most highly cited patent (the ‘537 patent) was issued over 10 years ago and has only been cited by 18 patents:  4 of these are the other 4 patents in the suit (yellow shaded) together with 11 other Bose patents. Only 3 non-Bose patents cite the Asserted Patents – one Phlips patent, one Freescale patent and one Wolfson patent.   Click on map image to view live IPVision Patent Map.

What Patents Does Bose Have?

A quick search at See-the-Forest.com finds 1033 U.S. issued patents or published applications currently owned by Bose Corporation.  Of these 159 contained the word “noise” in the title, abstract or claims.   Of these 84 have been issued as U.S. patents (“Bose Noise Patents”).  This IPVision Patent Interconnection Map shows these patents – the 5 Bose Asserted Patents are marked with the Blue Stars.

There are 413 patents that cite the Bose Noise Patents.  These are owned by over 200 companies, none of which are Beats:

So it appears that:

What Patents Does Beats Electronics Have? 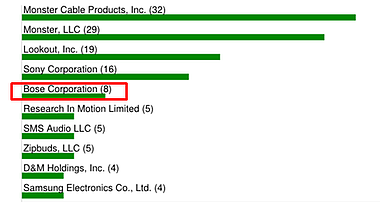 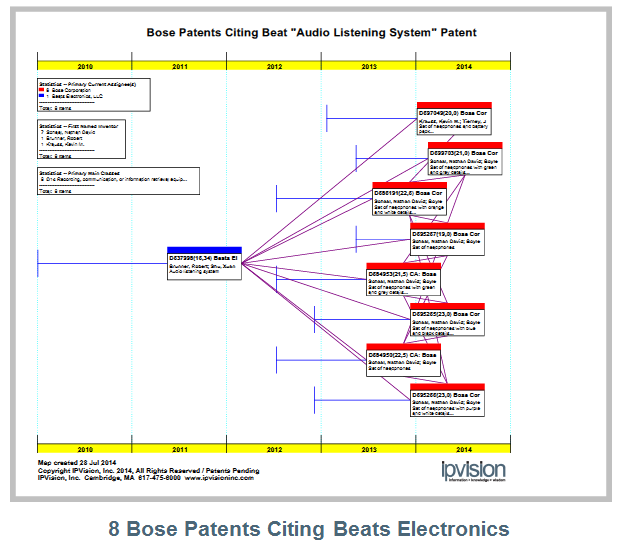 It will be interesting to see if and how Beats Electronics/Apple uses its/their patent portfolio in this case.