Patent News: Technology is Becoming More Flexible; The Government is Not 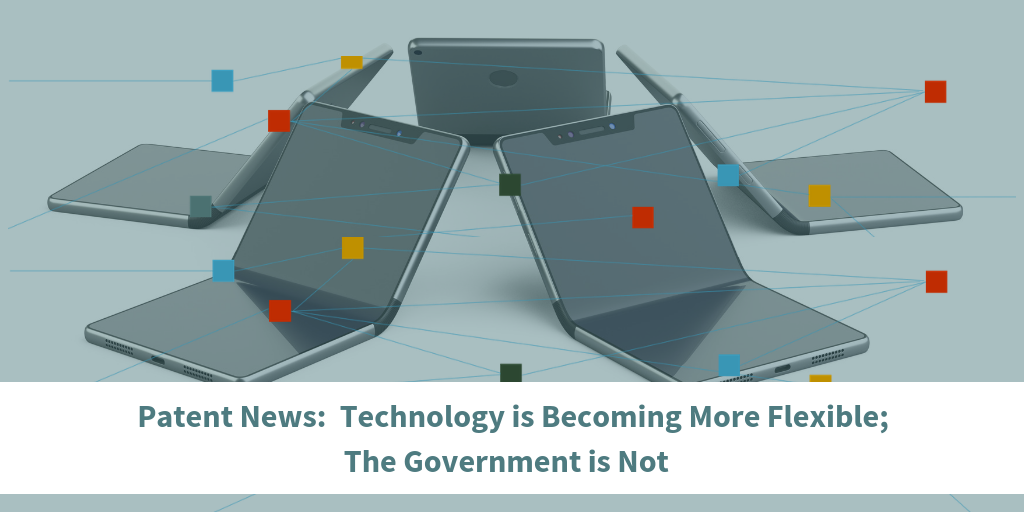 While companies are working harder on getting foldable tech in their devices, the market could see a delay in seeing such technology while we wait to see how the federal government handles the current state of on-and-off closure.

Foldable technology is putting a new a meaning to the idea of being flexible. Last year, the world saw several patents for foldable smartphones, but now Intel is pushing the envelope a little further. The new device, seen in a 2017 patent, shows a phone that folds out into a tablet PC. Three screen sizes will be available to meet every need. For the user who likes a bigger screen, you’ll find a full screen. For the one who needs a compact device to pack away in their pocket, a phone-sized display meets that need. The patent is detailed with plenty of pictures to give the idea that the device can be adaptable to many other devices as well.

Samsung has announced its own foldable display phone – the Galaxy Fold. Time will tell how many other companies will join in the folding game.

Changes to OLEDs in devices such as the Apple Watch could catapult them to lead the way in the flexible technology race. The $750 million increase in R & D in CY2018Q4 over the prior year could be directed at the development of elastic substrate layers instead of glass in iPhones.  A series of patents for this flexible technology were issued to Apple, beginning in December 2017. The timing is great because the market for this tech has more than doubled over the past 5 years. Look for an explosion in the flexible tech market in the near future.

Even with the government temporarily reopening functions, we are just realizing how many aspects of daily business are being affected. The USPTO was able to continue to stay in operation, thanks to a special reserve provided by fees collected before the shutdown began. This fund was created as part of the AIA (America Invents Act). However, due to the length of the shutdown, the reserves have become mostly depleted and will need more time to build up again if the office hopes to stay open during another shutdown.

Should the Innovation Community be pressing for the USPTO to become more self-funded and above politics?

Intellectual Property Cases in the U.S. Supreme Court on the Rise

The slowdown of operations in the federal government is not good news for cases being heard by the Supreme Court. This specifically impacts the patent industry because in its current term, SCOTUS is on schedule to hear five cases related to intellectual property: two patent-related cases, two related to copyright, and one for trademark rights. This is a huge trend reversal for the court as they have typically heard few such cases in the past. Decisions may have a great impact on businesses and their ability to protect intellectual property. Stay tuned for results!

As the Supreme Court has been picking up more IP cases, the U.S. Appeals Court for the Federal Court has also been busy. The concentration has been on obvious-type double patenting. In two recent cases, patents have not been ruled invalid in court due to conflicting expiration dates on the patents. With no exemptions in either of the earlier-filed patents to restrict competition, the court had a fairly straight-forward ruling.

Staying on top of patent news helps your company prepare for any disruption that may be headed your way. You can get ahead of the news cycle with your own patent analysis - and we can help. Reach out any time and let us know what your individual needs are.