A Closer Look at Patent Quality During M&A 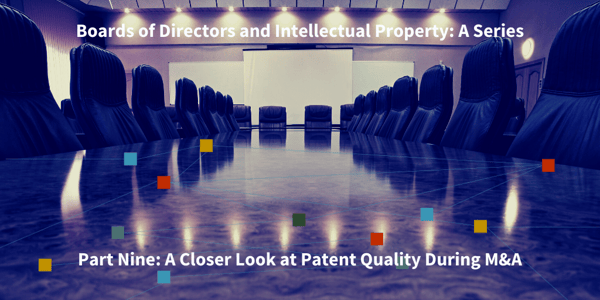 To this point, we have discussed the importance of IP and the high level questions a Board of Directors should ask Management about the company’s intellectual property. These questions cover a wide range, believe it or not. It’s never so simple as simply knowing which patents the company holds, though many Boards leave even that much to the IP lawyers. First, there’s the deep dive into research and development, which questions such as:

Key metrics here are R&D expenditures per patent obtained, or the inverse, patents per R&D dollar.

These are important metrics that are relatively easy to obtain for the company and for its peers, but they are only the first part of the inquiry. Next, we turned to the importance of evaluating intellectual property during a merger or acquisition. This opens a whole new avenue of exploration that deserves attention from the business departments of your company and not just the legal side.

A Tale of Two Portfolios

When acquiring a company or one of their patent portfolios, it’s important to investigate the patent claims to make sure you’re not getting landlocked property with rotting wooden fences. The desired outcome is, of course, to acquire property that benefits your R&D, product development, and monetization possibilities.

This kind of structured approach to patent analysis and acquisition due diligence leverages a range of proven research methods, analytics, and expert systems to analyze potential acquisition targets for purchase or lease and reveal:

Comprehensive IP assessment is crucial to the business acquisition process to help buyers accurately assess a technology sector, the players engaged in it, and the IP affecting it.

In 2016, Analog Devices acquired Linear Technology and the patents within their portfolio. Here are excerpts from our earlier R&D Spend and Patent charts:

On the metric of “R&D Expense ($M) per US Patent Application By Year”, Linear spent almost 3 times as much on R&D for each application (average $8.85M) as Analog Devices (average $3.1M):

As you can see from this chart, Analog Devices has a slightly higher % of “A Rated,” i.e., broad claims. 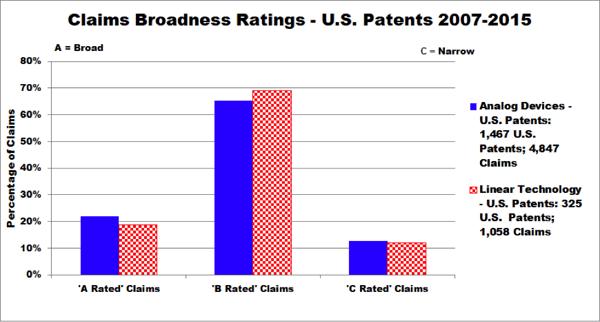 In this chart, however, you’ll see that Linear’s patents are of higher quality, with more “1 – problem” and “2 – minor issue” rated claims from a structure viewpoint.

In this particular case, Analog Devices was fortunate to acquire property with strong fences, which only added to the strength of their own property protection.

If there are true innovations coming out of R&D and not just minor add-ons and extensions, you would expect the Structure ratings to be better. The reason is because there is more “land” to claim in a new technology or innovation.  As an area of technology matures, there is less land to claim and patent claims become longer and more verbose in order to work around prior art. This introduces more limiting clauses, confusing wording, indefinite terms, and other language issues. Our strength ratings pick these up.

You might be interested to discover that our findings through our Claims Analysis program match the opinions of several close to the acquisition, as well as reporters who were surprised by the deal.

Here are some interesting quotes from that article that suggest that Linear was more innovative:

“Linear Technology was founded 16 years after Analog Devices was established in 1965. The startup quickly turned into a bastion for analog design, in an industry shifting toward digital circuits with the rise of personal computers. Its first employees were defectors from other Silicon Valley companies — including National Semiconductor, where Swanson served as vice president for analog design — that had been leaving analog behind.

“Swanson’s exit created a vacuum that sucked in other analog gurus. These included Dobkin, George Erdi, and Bob Widlar, a former Fairchild Semiconductor engineer who later became known as the “god of the operational amplifier.” The initial migration turned Linear Technology into a destination for analog engineers and eventually into something like an apprentice program for students of the analog craft.

“Linear Technology has leaned on the expertise passed through its ranks. For most of his career with the company, Swanson rejected the idea of buying new technology through big acquisitions. Instead, he favored developing new circuits in-house. Linear has only made one acquisition in its history — Dust Networks, a wireless sensor networking company, in 2011.”

As you can see, a thorough investigation into the quality of the IP your company plans to acquire through mergers and acquisitions is an important step in the process—and one too often left out. Perhaps you can still reach your intended goal on your current path, but there is a good chance your plans would change if you took the time to investigate thoroughly.

We’re nearing the end of our series, with only a wrap-up and checklist to come. We hope you have discovered valuable information within these blogs. A full ebook version will be available shortly after the publication of the conclusion. This will be free to you, including the downloadable checklist. Please feel free to share these articles and the ebook with anyone you feel will benefit from the information within.